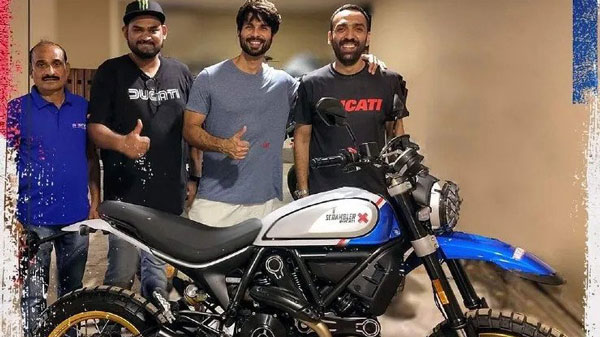 Shahid’s Ducati motorcycle is available in a dual-tone sparkling blue and white paint scheme. This is the new 2022 model of the Scrambler Desert Sled that has been introduced in new design elements and colours.

The Ducati Desert Sled is a scrambler design motorcycle. It also comes with a longer suspension than the regular scrambler model. Apart from this, this bike has been given a multi-level adjustable suspension setup with 200 mm of travel. The specialty of this bike is that it can be used for commuting as well as off-roading. It can be easily driven even on rocky and sandy roads.

The Ducati Scrambler Desert Sled is powered by an 803 cc L-twin engine that churns out a maximum power of 75 Bhp and 68 Nm of torque. Let us tell you that actor Shahid Kapoor also has a big Ducati Scrambler 1100 bike. He bought this motorcycle in 2019.

The Ducati Scrambler 1100 uses a 1,079 cc L-twin engine that comes with liquid cooling and churns out a maximum power output of 85 Bhp and a maximum torque of 88 Nm.

Apart from this, the actor’s garage also includes a BMW R 1250 GS. It is a full-size adventure touring motorcycle that is powered by a 1,254 cc boxer engine. This bike is capable of giving power of around 135 bhp.