Scientists told how the first predator on Earth looked like. He had an exoskeleton and no teeth 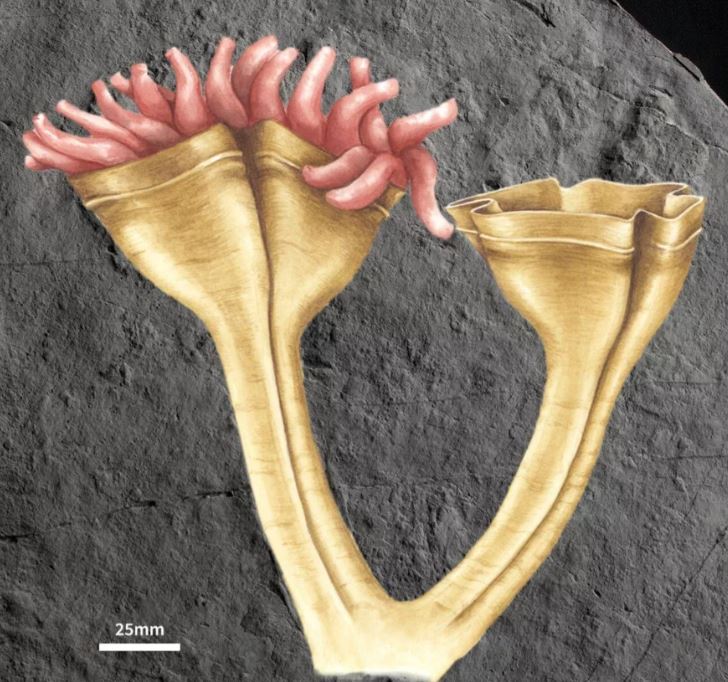 British paleontologists have published a description of an unusual fossil about 560 million years old. This is the oldest predator, the oldest creature with an exoskeleton, and also the earliest known representative of the animal world, whose related species have survived to this day. Before that, it was believed that organisms similar to modern ones appeared on Earth 20 million years later.

Most of the forms of organisms that we know arose in a very short period at the beginning of the Cambrian period – about 542 million years ago. At this time, biodiversity increased dramatically, and many types that exist to this day were formed – chordates, arthropods, echinoderms, mollusks. Paleontologists consider this event the most significant in evolution and call it the “Cambrian explosion”.

Until the middle of the last century, there was an opinion among scientists that before the beginning of the Cambrian, there were no multicellular organisms on Earth at all. But then, in older layers dating back to the Ediacaran – the last period of the Proterozoic, which lasted from 635 to 541 million years ago – strange fossils began to be found.

At first, they were not given much importance due to the very poor preservation and ambiguity of biogenic origin. This continued until 1957, when the first confirmed specimen of a Precambrian multicellular organism was found in the rocky hills in the north-west of Leicestershire in central England.

The imprint, similar to a plant branch, was interpreted as an algae. But then it was determined that its closest relatives among modern animals are sea feathers: these are soft corals that live at great depths. The new species was given the name Charnia masoni in honor of Charnwood Forest, the place where it was discovered, and Roger Mason, the schoolboy who first discovered the fossil.

This was followed by finds of Ediacaran multicellular organisms in other places – in Canada, Namibia, Australia, Russia. Basically, these were the impressions of soft-bodied, attached to the ground or floating in the water column, creatures without a skeleton, arranged much more simply than later organisms of the Cambrian period.

Attempts to find the ancestors of any modern species among the Ediacaran fauna were unsuccessful. What these ancient creatures ate, what lifestyle they led – scientists still do not know for sure. Hence the assumption that the anatomically familiar life forms arose only as a result of the Cambrian explosion, and before that the oceans were inhabited by fundamentally different types of organisms that completely disappeared from the face of the Earth as a result of mass extinction at the end of the Proterozoic.

The sensation refuting this point of view came from the same Charnwood forest. Among the thousands of Ediacaran fossils collected in the area as early as 2007, a rock specimen with an imprint that surprisingly resembles modern cnidarians, or cnidarians, caught the attention of British scientists.

This type includes jellyfish, anemones and soft corals, which have stinging cells – cnidocytes, which animals use to hunt and protect themselves from enemies. Biologists consider cnidarians to be one of the oldest types of multicellular organisms, whose representatives have survived to this day. Now it turned out that they appeared even before the Cambrian explosion. The find was published in the journal Nature Ecology & Evolution.

“Cnidarians are one of the most ancient living creatures on Earth, whose evolution in the Cambrian period is well studied. For the first time we managed to find an imprint related to the previous, Ediacaran period. This was the first unequivocal evidence of the existence of stinging animals in the Precambrian era, ”the researchers write.

The ancient polyp was named Auroralumina attenboroughi. The first part is translated as “torch of dawn” and indicates that, firstly, it is the earliest representative of the anatomically modern fauna, and secondly, that its shape resembles a burning torch. The second is given in honor of the British naturalist, broadcaster and science promoter Sir David Attenborough, who spent his childhood in Leicestershire collecting specimens in Charnwood Forest.

The age of the strata in which the fossil was found is 557-562 million years. If Auroralumina was similar to cnidarians not only in shape, but also in lifestyle, then this is the most ancient predator of all biological species known today. The authors believe that it fed in the same way as modern soft corals: it captured plankton passing by with its tentacles. However, unlike the same sea anemones, it had a strong exoskeleton. And this is another sensation.

Among biologists, there is an opinion that the driving force behind the Cambrian explosion was an “arms race” between predators that appeared at the turn of the Proterozoic and Paleozoic and their potential victims. A sharp increase in the oxygen content in the atmosphere has led to the fact that it has become energetically beneficial for organisms to eat each other – oxygen is needed to process animal food.

External threat accelerated natural selection. Those who were in the role of prey turned on a variety of evolutionary defense mechanisms. As a result, some species of invertebrates have developed an exoskeleton – a shell that protects the body from predators and infections. Ironically, Auroralumina turned out to be not only the oldest predator, but also the earliest known creature with a skeleton. Scientists concluded: he also had enemies from whom he defended himself.

The ancient polyp is somewhat larger than modern relatives, its body reaches twenty centimeters. According to the researchers, this indicates that it did not have the free-swimming medusa stage found in some cnidarians. Most likely, this is a sessile animal, which, by analogy with anemones, remained in place all its life, attached to the seabed in coastal waters.

True, the fossil was found among deep-sea sediments, but it is located in them at an unnatural angle. Therefore, the authors believe that the skeleton of the organism was blown off the slope of the ancient volcanic island by lava flows to a depth where it was buried along with other, typically Ediacaran animals.

It is unlikely that we will ever know, with an accuracy of thousands of years, the time when complex multicellular life appeared on Earth. But now, after the discovery of Auroralumina, we can definitely say that 560 million years ago there was already an “arms race” in the ocean, thanks to which all modern species, including humans, eventually appeared. And it is quite possible that animals, very similar to modern jellyfish and polyps, started it.