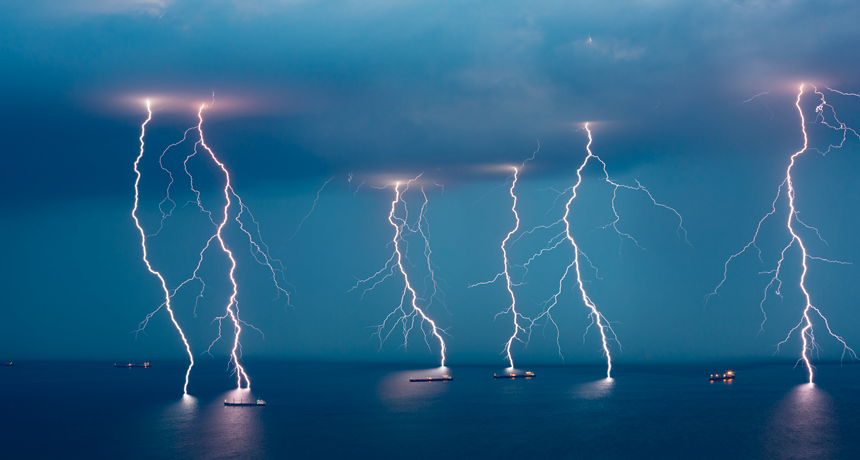 Chinese and American scientists have found that lightning rarely occurs during sea storms due to the presence of salt particles and large aerosol droplets inside thunderclouds. The physicists’ findings were published in the journal Nature Communications.

“Our observations and experiments have shown that an increase in the number of small aerosol particles in thunderclouds leads to an increase in lightning frequency. In turn, the appearance of salt particles and large aerosol droplets in them weakens the convection inside the clouds, as a result of which the frequency of the appearance of electricity discharges sharply decreases.‘, the researchers explained.

The nature of lightning was described as early as 1749. Experiments with lightning rods and kites have shown that lightning is electrical discharges that travel between thunderclouds and the Earth’s surface.

At the beginning of the current decade, thanks to the research of Russian physicists, the picture became more complicated. It turned out that lightning is similar in structure to mathematical fractal figures, and not only terrestrial atmospheric processes, but also cosmic rays, whose particles play a key role in the birth of these electricity discharges, participate in their birth.

A group of Chinese and American physicists led by Gong Wei, a professor at Wuhan University, uncovered the reasons why sea thunderstorms and storms are accompanied by significantly less lightning than their counterparts on land. Scientists made this discovery while studying the properties of the atmosphere in the coastal and continental regions of the tropics and temperate latitudes.

Using this data, the scientists compared the properties and structure of storm clouds over sea and land. This analysis indicated that maritime storms generated significantly less lightning than their land-based counterparts only if large numbers of salt particles and large aerosols were present in the cloud column.

Having revealed this pattern, Professor Gong Wei and his colleagues calculated how the presence of small and large aerosol droplets affects the electrical properties and behavior of clouds. Their calculations showed that the appearance of salt particles and large aerosols inside the cloud leads to a slowdown in convection, the rise of warm, humid air masses, the cooling process of which in the upper atmosphere plays an important role in the formation of lightning.

According to physicists, this feature of marine thunderclouds explains why lightning occurs relatively rarely during storms in the ocean. This feature of ocean storms must be taken into account when assessing how the transfer and circulation of heat in the atmosphere over the World Ocean proceeds, which is important for assessing its role in slowing global warming, the scientists concluded.