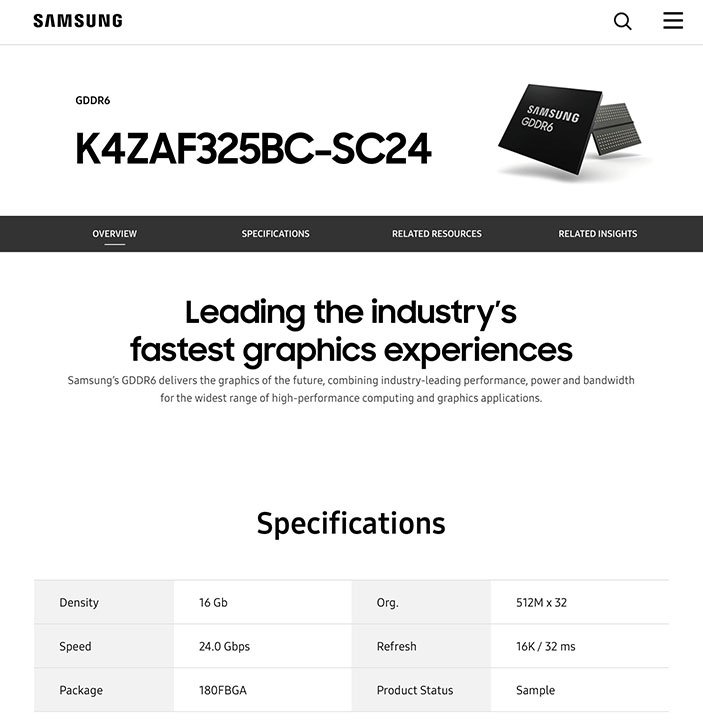 According to the source, Samsung has begun shipping samples of GDDR6U memory chips supporting 24 Gb / s data transfer rates. To be clear, these are standard GDDR6 chips created according to JEDEC specifications, not GDDR6X chips, the specifications of which were jointly developed by Nvidia and Micron.

The Samsung chips described can be used by both Nvidia and AMD if their GPUs support the above baud rates. Catalog index of microcircuits – K4ZAF325BC-SC24. A density of 16 Gbps means 8 chips are enough to get 16 GB of memory connected to a 256-bit bus. If you take 12 chips, you can get 24 GB on a 384-bit bus.

At 24 Gbps, these chips provide 50% more bandwidth than chips running at 16 Gbps and 71% more than chips running at 14 Gbps. A hypothetical 6nm Navi 21 GPU upgrade paired with these chips will feature 768GB / s memory bandwidth over Infinity Cache bandwidth, up from the current 512GB / s of the current Radeon RX 6800 XT. The source suggests that AMD and Nvidia already have samples of the chips. It is not yet known when mass production will begin, but it could definitely happen in 2022.