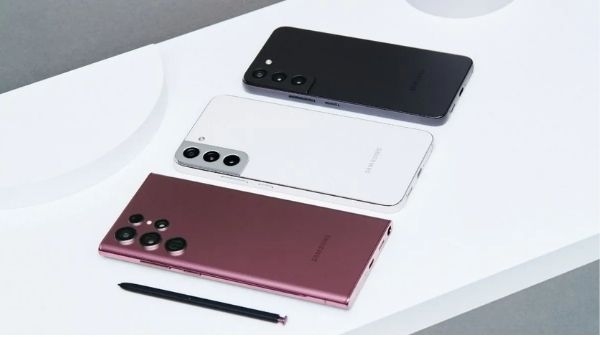 South Korean tech giant Samsung has organized Samsung Galaxy Unpacked Event 2022 today. In which the much-awaited smartphone Samsung Galaxy S22 series has been launched. Apart from this, many other products have also been launched in this launch event. So let’s take a look at all the products.

So let us now know about all these in detail:

Both the phones are powered by an unknown 4nm processor coupled with 8GB of RAM and up to 256GB of storage space. These are available in 8GB+256GB and 8GB+128GB variants. These smartphones run on Android 12-based One UI 4.1.

Apart from this, both the Samsung Galaxy S22 and Galaxy S22 Plus get NFC and an ultrasonic fingerprint sensor support. For connectivity, both these phones have 5G, LTE, WiFi Direct and Bluetooth 5.2.

The Samsung Galaxy S22 has a 6.1-inch screen and the Galaxy S22 Plus has a 6.6-inch screen. Both these phones come with 120Hz screen refresh rate and 240Hz touch sampling rate.

Samsung Galaxy S22 Ultra flaunts a 6.8-inch EDGE QHD+ Dynamic AMOLED 2x display. It comes with 120Hz screen refresh rate and 240Hz touch sampling rate. It supports Samsung’s SPen Stylus. Both the Galaxy S22 Ultra smartphone and the SPen Stylus come with IP68 dust and waterproof coating. It also has Corning Gorilla Glass Victus on both the front and back.

In terms of battery life, the Galaxy S22 Ultra packs a 5,000mAh battery that comes with support for 45W wired charging, 15W wireless charging, and wireless PowerShare technology. Connectivity includes 5G, LTE, WiFi 6E, WiFi Direct, Bluetooth 5.2. Apart from this, an ultrasonic fingerprint sensor and NFC have also been given in it. Whereas Samsung Galaxy S22 Ultra comes in White, Black, Green and Burgundy color variants.

The new Tab S8 lineup is powered by a 64-bit octa-core processor. The S8 and S8 Plus come in two storage configurations – 8/128GB, and 12/256GB of storage. For the Galaxy S8 Ultra, Samsung has added another option of 16/512GB of storage. All three tablets have expandable storage support up to 1TB via microSD card. Talking about the software, the company has given custom OneUI 4 skin to the latest Android 12 software.

While on the front is a dual front camera with a 13-megapixel (AF) sensor, as well as a 6-megapixel ultra-wide sensor with a flash rest at the center of the display.

Apart from all this, Samsung has also introduced Wallet. This Samsung wallet will support a variety of IDs, credit, debit cards and more. In addition, Samsung Wallet will also support access to cryptocurrencies.

Samsung has also given One UI 4 update in this unpacked event. All in all, the South Korean giant has unveiled these most awaited devices at this event.