Samsung Galaxy S22+ shown in all colors in high-quality images 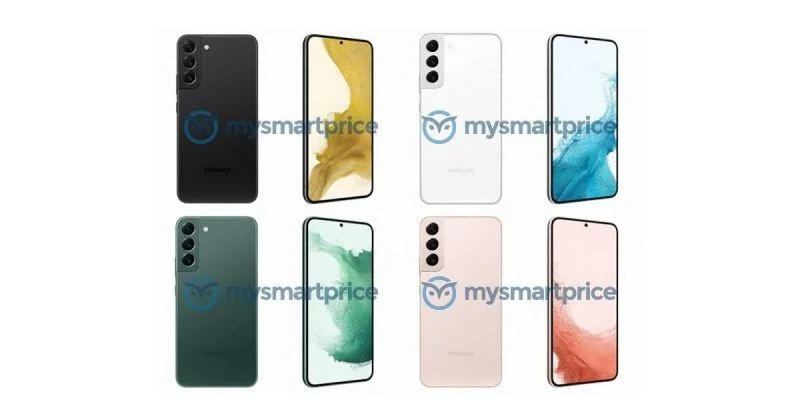 The source, who previously posted supposedly official renderings of the black version of the Galaxy S22+ smartphone, has now posted new images showing the smartphone in a few more colors.

Galaxy S22+ renders show it will be available in four colors including black, green, white and rose gold. The leaked renders also let you see the device from two sides. There is a flat screen with a fingerprint scanner on the front, and a triple camera on the back. On the right side of the smartphone are the volume rocker and the power key.

Galaxy S22+ expected to feature 6.55-inch AMOLED FHD+ display with 120Hz refresh rate and record-breaking 1750cd/m2 brightness2. For selfies, it will have a 32-megapixel front-facing camera, while the rear will house a 50-megapixel main camera, a 12-megapixel ultra-wide-angle module, and a 12-megapixel telephoto lens.

The device will be preinstalled with Android 12 operating system based on One UI 4.0. It will have a 4500mAh battery that will support 45W fast charging.

European stores already posted on their sites pages for various models of Samsung Galaxy S22 with prices. Without exception, all smartphones are equipped with a single-chip Exynos 2200 system.

The company itself Samsung indirectly confirms Galaxy S22 release date and return of Galaxy Note design in Galaxy S22 Ultra. Samsung is preparing a new website for the launch of new flagship phones, and new samsung release, samsung galaxy 2022, galaxy s series and galaxy note series are found in the list of meta tags. It also became clear why Samsung is increasing prices for Galaxy S22 smartphones: some components have risen in price by 30-40%.

In addition, today it became known that the company Samsung to launch 1TB version of its flagship smartphone Samsung Galaxy S22 Ultra.