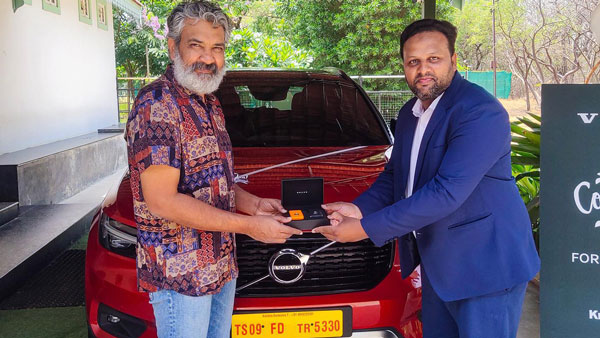 Volvo Cars India has shared a picture of SS Rajamouli taking delivery of the new Volvo XC40 on its official Instagram account. In the image released by the company, it can be seen that the keys of the car are being handed over to SS Rajamouli by a Volvo Cars India official.

Talking about Volvo XC40, the company is selling this car at a price of Rs 37.99 lakh (ex-showroom). Let us know that the Volvo XC40 has been introduced in India in the only T4 R-Design variant. Let us tell you that last year the company had reduced the price of this car.

Talking about its design, it gets the company’s signature T-shaped DRLs and a single-frame front grille in gloss black. Apart from this, the thick plastic cladding over the 18-inch alloy wheels gives the XC40 a rough and tough look.

The company has used vertical tail lamps and two-tone exterior colors in this car, which give this SUV a unique and strong road presence. Talking about the interior, the portrait layout and leather upholstery have been used in the Volvo XC40.

Apart from this, the company has given a 9-inch touchscreen infotainment system with Harman Kardon stereo system, powered tailgate, ambient lighting, 12.3-inch instrument cluster, keyless entry, panoramic sunroof. The company has also given many safety features in it.

Talking about the safety features, it has been provided with Adaptive Cruise Control, Lane Keeping Assistant, Park Assist Camera, Hill Start and Descent Control and Collagen Mitigation Support. The Volvo XC40 could also be offered with a petrol engine.

Talking about its engine, the 2.0-litre naturally aspirated diesel engine has been used in the Volvo XC40 SUV, which provides 187 bhp power and 300 Newton meter torque. An 8-speed automatic gearbox has been used with this engine.