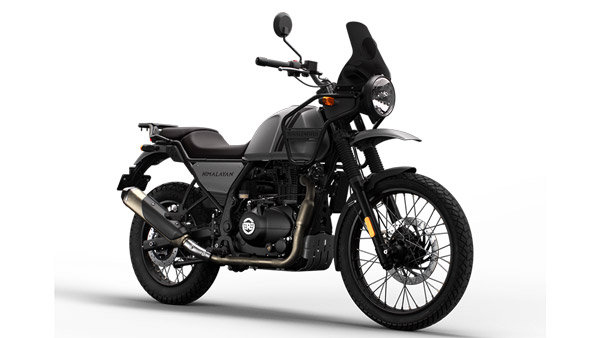 The new 400cc bike has been spied several times in road tests to reveal its features and capabilities. It was believed that this new Himalayan variant would be named Scram 411. Now this has been confirmed through the brochure that appeared in front of it.

Royal Enfield Himalayan, Scram 411 official accessories like T-shirts, keychains have also reached the dealerships. Talking about its design, the basic silhouette of the Royal Enfield Scram 411 is similar to that of the Himalayan. It uses a retro theme, which includes round headlamps and rear-view mirrors.

Other things like fork gaiters, fuel tank design, wide handlebar, chassis, split seats and upswept exhaust remain the same as the Himalayan. For its road-based transformation, many parts have been removed. For example, the Scram 411 does not have dedicated racks at the front and back.

It gets compact size tank shrouds at the front and a single piece grab rail at the rear. Another significant change is that it will use a smaller 19-inch front wheel, as against the 21-inch wheel currently used with the Himalayan.

The bike is still capable of some off-roading, as it uses wire-spoked wheels along with dual-purpose tyres. Up front, the Royal Enfield Scram 411 doesn’t come with a windscreen, while its front fenders are raised.

The turn indicators are expected to be different in size as compared to the Himalayan. There may be some other minor changes in the overall styling of the bike. Some new color options can be introduced for the Royal Enfield Scram 411 for special recognition.

For users who need it, tripper navigation can be offered as an accessory with the Royal Enfield Scram 411. Talking about its engine, it will use the same 411cc engine that is currently being used with the Himalayan.

This is an air-cooled, single cylinder, SOHC engine that generates maximum power of 24.3 bhp and maximum torque of 32 Nm. A 5-speed gearbox is used with it. It is possible that the engine could be slightly in-line with the needs of a road-biased motorcycle.

Most of the hardware will remain the same such as telescopic front forks and monoshock suspension at the rear. The suspension can be made tighter for better on-road performance. The Royal Enfield Scram 411 will get disc brakes at both the ends along with dual-channel ABS as standard.