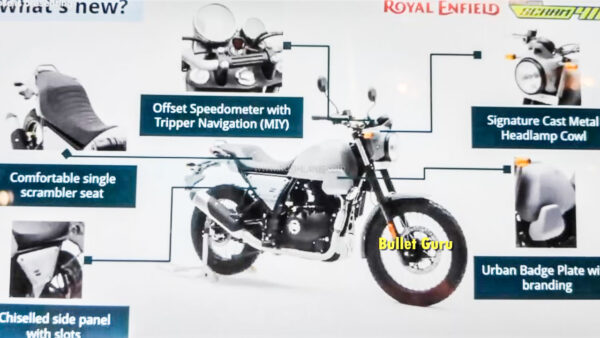 Royal Enfield, India’s leading two-wheeler manufacturer is known for the Bullet, but in the last few years, the company has ventured out of the Bullet segment and tried its hand elsewhere. You will remember that while entering the adventure segment, the company launched the Himalayan in the market. However, this bike is not made for general commuting needs, and this is the reason why its sale is also limited in India.

But now it seems, the company is taking a fresh look at it, we are saying this because according to the information received, Royal Enfield is working on a toned-down version of the Himalayan. The new 400cc bike has also been spotted on road tests several times, which reveals its many features. The new Himalayan version is believed to be called Scrum 411. At the same time, it has now been confirmed through the leaked brochure scan. Yes, according to the leaked brochure from Himalson, the official accessories of the Royal Enfield Himalayan Scream 411 have reached the dealership.

According to the pictures, the Royal Enfield Scrum

411 has been given the same basic silhouette as the Himalayan, along with the use of retro themes in both the bikes. The round headlamps and rear-view mirrors share the same design of the fuel tank, wide handlebar, chassis, split seats and upswept exhaust as the Himalayan.

The smaller 19-inch front wheel will be used in the Royal Enfield Scrum 411. Whereas the 21-inch wheel size is used in the current Himalayan. The windscreen has been removed from the front of the Scrum 411, and the front fenders have been raised. The size of the turn indicators is expected to be different as compared to the Himalayas. Overall, there may be some other minor changes in the styling of the bike.

engine will be similar to Himalayan

The 411cc SOHC motor will be used as the engine power in the Scrum 411. Which currently also gives power to the Himalayan. This engine generates maximum power of 24.3 bhp and peak torque of 32 Nm, and is mated to a 5-speed gearbox. According to the report, the suspension can be made tighter for better on-road performance. Notably, the Scrum 411 will get dual-channel ABS as standard along with disc brakes at both the ends.