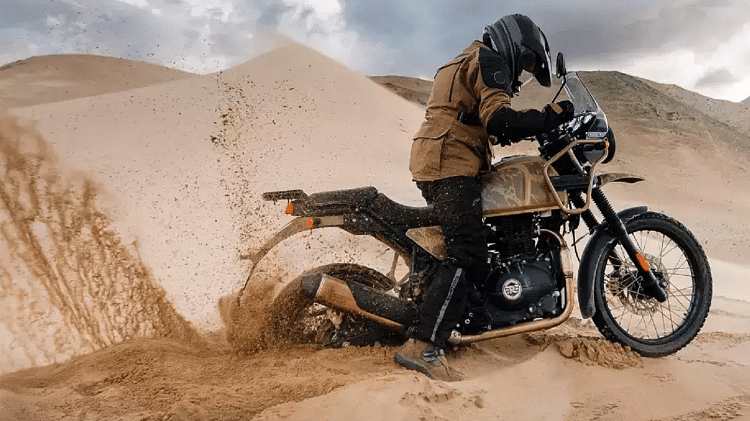 Royal Enfield (Royal Enfield) has introduced Himalayan (Himalayan) with three body paint options and has also made many updates. The adventure-touring motorcycle is now offered in Glacier Blue, Sleet Black and Dune Brown colors in addition to the existing Gravel Grey, Pine Green and Granite Black. Showcased at Rider Mania 2022, the Himalayan will also feature embossed logos on the grille and side panels, and a USB charging port.

Starting November 24, the new Himalayan will be available for bookings and test rides across all Royal Enfield stores in India. The company has fixed the new Royal Enfield Himalayan price of Rs 2,15,900 ex-showroom in Chennai.

The Dune Brown color option of the Royal Enfield Himalayan has been priced at Rs 2,22,400 in Delhi, while the Sleet Black and Glacier Blue are priced at Rs 2,23,900. All prices are ex-showroom Delhi.

What is the meaning of the new colors

According to Royal Enfield, the three new color options of the Himalayan are inspired by the terrain, vastness and grandeur of the Himalayas. The Glacier Blue color is inspired by glacial lakes, while the Dune Brown represents the Himalayan desert of Hunder, located in the Nubra Valley, Ladakh. The sleet pattern is back but with a new version called sleet black.

Since it was first introduced in 2016, the Himalayan has carved a very strong presence among avid bikers and riders looking for a rugged adventure motorcycle.

Commenting on the launch of the new colour, B Govindarajan, CEO, Royal Enfield said, “The Royal Enfield Himalayan has been developed with the experience of riding in the mountains and traversing some of the toughest terrains. The Himalayan claims to have created a new segment of adventure touring as a simple and versatile go-anywhere motorcycle for riders across the globe.