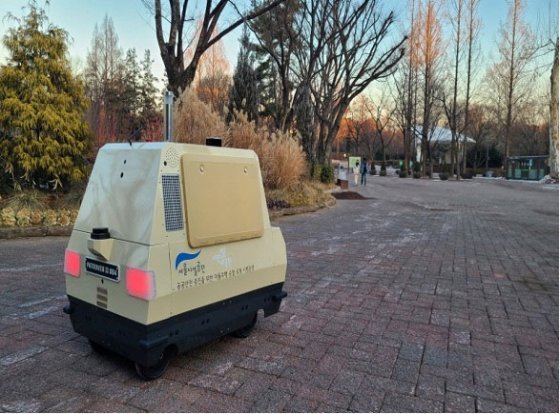 In order to solve various problems that occur in the daily life of citizens, the Seoul Metropolitan Government will introduce a ‘smart city service’ based on cutting-edge information and communication technology (ICT). Information and communication technology has been mainly introduced to facilities such as street lights and closed circuit (CC) TVs, but this time, the scope of application has been expanded to include crime prevention patrols and illegal parking and stopping.

The Seoul Metropolitan Government announced on the 21st that it will introduce a patrol service using an autonomous driving robot (pictured) at Children’s Grand Park in Gwangjin-gu and Tancheon Dulle-gil in Songpa-gu. As the robot patrols the park and the surrounding streets, artificial intelligence (AI) detects dangerous situations such as screams and fires, and the Internet of Things (IoT) notifies the control room of emergency situations with voice and siren. The robot is also responsible for disinfection tasks such as spraying disinfectant and disinfecting ultraviolet rays.

In Geumcheon-gu, a service that detects illegal parking in electric vehicle charging areas using IoT will be implemented in earnest. The IoT sensor recognizes the number of a vehicle that has entered the parking area, and if it is a non-electric vehicle, a voice guidance and warning light to “Park in a different area” is turned on. It will be implemented in 10 electric vehicle charging areas of Geumcheon-gu Office and public parking lots (Doksan 4-dong, Siheung 4-dong, multi-purpose).

Mapo-gu operates an IoT-based transparent PET bottle separation box. You can collect points by throwing away the transparent plastic bottle here, installing a dedicated mobile application (app), ‘Today’s Separation Collection’, and scanning the QR code. Ten units were installed in single-person households and areas with a high concentration of young people in Mapo-gu. If transparent plastic bottles are collected and recycled separately, high-quality raw materials that can be used to make functional clothing by pulling long fibers are produced, but the recycling rate is still low.

Park Jong-su, director of smart city policy in Seoul, said, “We plan to expand services with high citizen satisfaction and efficiency to solve various problems that occur in our daily life.”