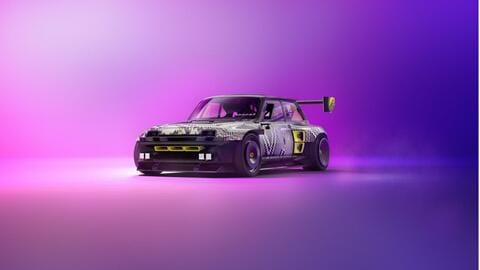 Veteran automaker Renault has unveiled its R5 Turbo 3E concept car . According to the information, the company is also planning to present it at the 2022 Paris Motor Show next month.This prototype has got a sporty look. It looks a lot like the high performance all-electric variant of the Reno 5 model.It includes a rear-wheel-drive layout with a dual-motor setup.Come, let’s know about it.

Design
How is the look of this car?

In terms of design, the Renault R5 Turbo 3E concept car looks like a track race sports vehicle and sports a tall bonnet, muscular hood, a sleek grille with multiple air scoops, cube-like bumper-mounted LED headlights, front air Features like splitter and raked windscreen are provided.Along with this, flared wheel arches and designer wheels have also been included in it. At the rear, it gets a large tailgate-mounted wing and diffuser.

powertrain
Got this information about the powertrain

According to the information, the rear-wheel-drive layout has been included in the Renault R5 Turbo 3E. It is powered by a dual-motor setup, coupled to a 42kWh lithium-ion battery pack. This powertrain is capable of generating 375hp of power and 700Nm of peak torque.This hatchback car will be capable of a top speed of 210 kmph. At the same time, it can also catch the speed of 0 to 100 kmph in just 3.5 seconds.

Features
Car’s cabin is equipped with these features

Talking about the design, the interiors of the Renault R5 Turbo 3E concept car are as luxurious as its looks. It gets a plaid-pattern dashboard, a straight handbrake lever for drifting and racing-type bucket seats with safety harness.Also, this hatchback gets a great looking multi-layer instrument console with various telemetry and leather steering wheel.It also gets multiple airbags and tubular roll cages for the safety of the passengers.

What will be the cost of this car?

The Renault R5 Turbo 3E is a prototype car and the French automaker plans to showcase it at the upcoming 2022 Paris Motor Show. No information has been revealed about the price of this car yet.

Renault is known for selling a range of affordable vehicles in India. At present, the company is selling only three cars Kwid, Kiger and Triber in the Indian market.Recently, the company’s new car Arkana has been seen during testing in many parts of the country. It is a compact SUV . The company can launch it in India next year.