Renault Kiger gets 4-star rating in crash test, know how safe it is 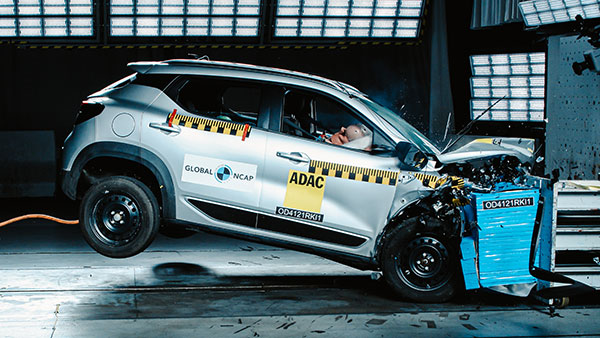 Talking about the safety of Renault Kiger, the driver and passenger have got good support on the head and neck. The driver’s chest has got enough support and the passenger’s chest has got great support. There is adequate support for the left knee of the driver and the passenger and good support for the right. However, its bodyshell was considered unstable and could not withstand further loads. The footwell area was considered stable.

On the other hand, if we talk about the safety of child passengers, then the adult belt given in it could not protect it. It has now become the 16th safest car in the country. On this occasion the company said that this reflects our highest level of safety. The SUV comes with four airbags, along with ABS with EBD, rear parking sensors, impact sensing door lock, speed sensing door lock.

It has a 60/40 splitter rear row seat and an anchor seat for children. The SUV achieved a mileage of 20.5 kmpl as per ARAI testing certification. Renault claims that the Kiger SUV offers the highest mileage in its segment, this SUV is available with 1.0L petrol and 1.0L turbo petrol engines.

The Renault Chigger has been offered in two engine options which include 1.0-litre petrol and 1.0-litre turbo petrol engine that makes 72bhp and 100bhp respectively. Manual and automatic gearbox options are available with both the engines. Renault India is selling its new compact SUV, the Cayger, in India as well as exporting it to the international market.

Talking about its design, the front LED headlight setup, front large grille with chrome honeycomb pattern and flat bonnet have been given. The Renault Chiger has been given an SUV-coupe-like design, with a sloping roofline that goes all the way to the blacked out sea pillar. Apart from this, the car gets a high ground clearance of 205 mm which is better for normal offroading.

High center console has been given in its cabin, in which consoles for such, fan speed and temperature control are available. Apart from this, three driving modes – Normal, Eco and Sports have been given in the car. Arkami’s 3D sound system has been installed in the car, along with 4 speakers have been installed in the front cabin. The Renault Kiger has been made available at a price of Rs 5.64 lakh, it comes with AMT and CVT and multiple drive modes, this includes Eco, Normal and Sport.

This SUV has been made available in five trims RXE, RXL, RXT, RXT (O) and RXZ. It has become the best selling model of the company at present. The company has recently exported a batch of 122 cars of the Kaigar to Nepal. Cars will be retailed in Nepal with the help of Renault’s distributor network.

The Renault Kiger has now also been excellent in safety and has performed well in crash tests. This is the second SUV from the company to get a 4-star rating in the crash test.