Renault Duster removed from the company’s website, the sale of this SUV stopped 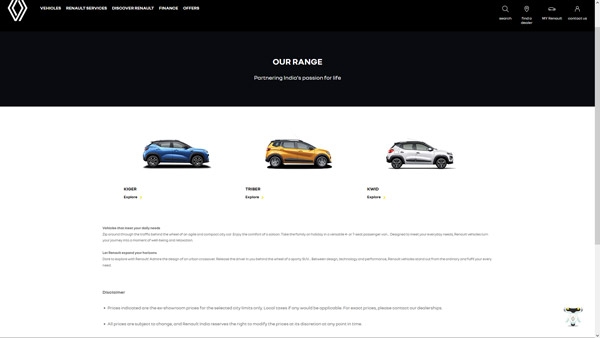 Now this SUV cannot be seen in the company’s website, while going directly to the Duster’s page, an error is being shown, but if you are really interested in this SUV, then you can enter your information in a page. In such a situation, those customers who are interested in it can be contacted before the new model is brought.

The third generation model is expected to be launched in the Indian market, which may also come with an electric version. The most recent update for the Renault Duster includes two engine options, with only the petrol engine being offered by the company. The first of these was a 1.5-litre diesel engine, which makes 106 Bhp, while the second is a 1.3-litre turbo-petrol engine, which makes 156 Bhp of power.

Both get a manual gearbox as standard, but only the turbo-petrol gets the option of a CVT gearbox. However, the Renault Duster lost its most unique feature in the BS6 update, which was an all-wheel drive variant. While Renault India has stopped its production, preparations are on to bring a new generation.

Talking about the features found in the Renault Duster SUV, it gets projector headlamps with LED DRLs, height-adjustable driver seat and electrically foldable ORVMs. Apart from this, the SUV also gets features like cruise control, 17-inch diamond-cut alloy wheels, 6.9-inch touchscreen infotainment system with Apple CarPlay and Android Auto connectivity and cooled storage.

Last month, Renault introduced the facelift version of Duster for the European market. As part of the mid-life facelift, the 2022 Duster has received a mild re-styling to bring it in line with the new model like the latest-gen Dacia Sandero. Dacia’s new Y-shaped headlight design and a chrome grille differentiate the new Dacia Duster SUV from the current car.

Not only this, the company has also used LED front indicators in this SUV for the first time, which are better and more visible than before. The new Dacia Duster will get a choice of new aero-optimized 15-inch and 16-inch alloy wheels. It gets a spoiler design, new wheel bearings, tires and more effective lights.

The Renault Duster initially received a great response from the customers but with time the competition increased and it fell behind in terms of features, equipment. Now it has to be seen how many and with what updates the company brings this SUV.