Realme Narzo 50A Prime is being launched in India today, know everything from special features 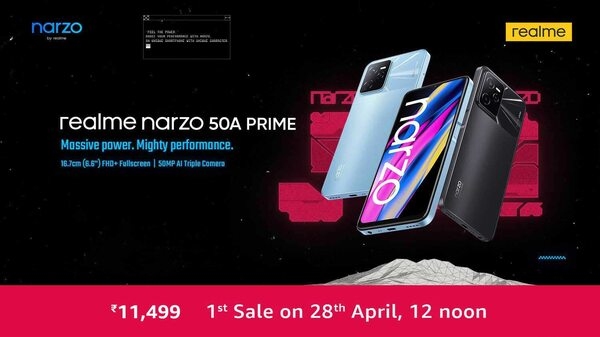 Realme Marzo 50A Prime Smartphone is finally being launched in India today. This smartphone may look like any other Narzo 50 series smartphone to you, but it is a little different.

Narzo 50A Prime is the company’s first smartphone that comes without a charger in the retail box. Realme said that removing the charger will make a positive contribution to the environment, as did Apple and then Samsung after removing the charger from their phone boxes.

Realme also said that it will continue to include chargers and power bricks in the retail boxes of most of its smartphones in the future. This means that Realme is not completely removing the charger in its smartphones.

Realme Narzo 50A Prime is a budget smartphone. Its features include a 6.6-inch IPS LCD with FullHD+ resolution of 1080×2400 pixels and an aspect ratio of 20:9. Realme has claimed a peak brightness of 600 nits on the display.

The power of #realmenarzo50APrime never stops! Packed with a 5000mAh Massive Battery, and also featuring an 18W Quick Charge; this is a smartphone you can rely on.#MassivePowerMightyPerformance

Coming to the camera, there is an 8-megapixel camera for selfies and video calls inside the teardrop style notch on the display. The triple-camera setup at the back of the Realme Narzo 50A Prime includes a 50-megapixel main camera, a 2-megapixel macro camera, and a 2-megapixel portrait camera.

The Narzo 50A Prime is powered by a Unisoc T612 SoC, paired with 4GB of RAM and up to 128GB of internal storage. If you need more storage, you can add a microSD card to the smartphone. The Realme Narzo 50A Prime packs a 5000mAh battery with 18W fast charging support via USB-C port. Keep in mind that the power adapter may also not be in the smartphone launched in India.

Packed with a powerful Unisoc T612 Processor, the #realmenarzo50APrime is here to make your smartphone experience smooth as ever!#MassivePowerMightyPerformance

You get a side-mounted fingerprint sensor on the Realme Narzo 50A Prime that runs Android 11-based Realme UI 2.0 out-of-the-box. For connectivity, you get dual 4G VoLTE, Wi-Fi, Bluetooth 5.0, GPS and 3.5mm headphone jack in the phone.

Narzo 50A Prime was launched in the Philippines at a starting price of PHP 1,999,000, which is approximately Rs 10,600. The estimated price is in line with the other Narzo 50-series phones in the price category. The first sale of realme narzo 50a prime ki will start on April 28 at 12.