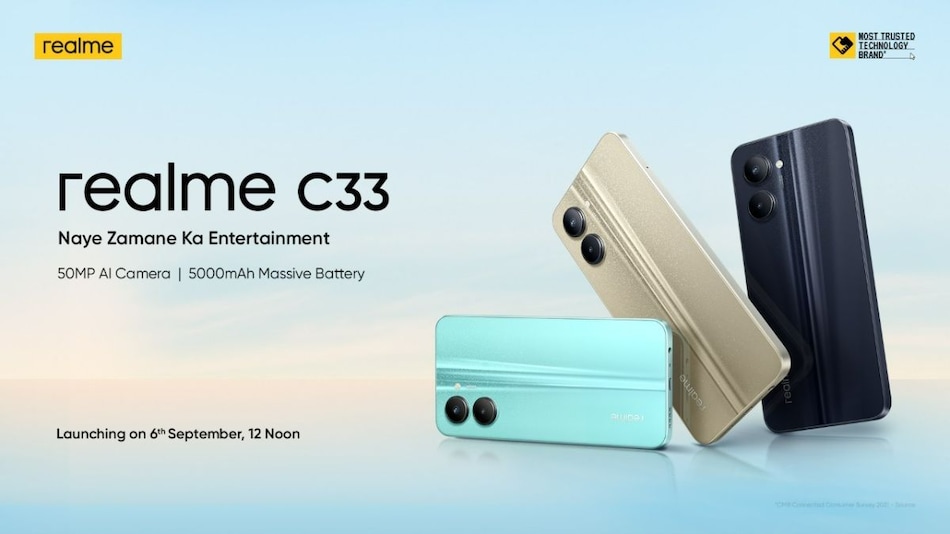 The launch date of Realme C33 India has been set for September 6, the company announced today. It has been confirmed that Realme’s upcoming smartphone will get a 50MP main camera on the back and a 5,000mAh battery. Further details of the handset are currently unknown. However, a microsite dedicated to the phone has gone live on the Realme India official website. It will have a dual rear camera and a sleek design. Last month, the Realme C33 was tipped to come in three colors and storage options.

The Chinese smartphone maker announced on Saturday that the Realme C33 will be launched in India on September 6 at 12 noon. A dedicated smartphone landing page is also live on the Realme India website. The landing page shows some specifications and details about the phone and shows the phone in three color options.

The Realme C33 comes with a dual rear camera setup that includes a 50-megapixel primary sensor. According to Realme, the smartphone offers the highest pixel performance in the segment, has a CHDR algorithm for clearer backlit photos and offers multiple shooting modes. The handset has been confirmed to pack a 5,000mAh battery, which is said to offer up to 37 days of standby. The phone also gets an ultra-save mode for longer battery life.

Apart from these specs, Realme has also confirmed that the phone will be 8.3mm thin and weigh 187g. The Realme C33 will be launched in at least three color options as seen on the microsite. Further details about the smartphone are to be announced before the market launch.

Recently, the Realme C33’s storage, color options, and price were leaked by a tipster. According to the leak, the smartphone will be available in Sandy Gold, Aqua Blue, and Night Sea color options. It will come in 3GB RAM + 32GB storage, 4GB RAM + 64GB storage, and 4GB RAM + 128GB storage variants. The handset is also said to be between Rs. 9,500 and Rs. 10,500.