Ranveer Singh got his sports car modified, the new look will win your heart 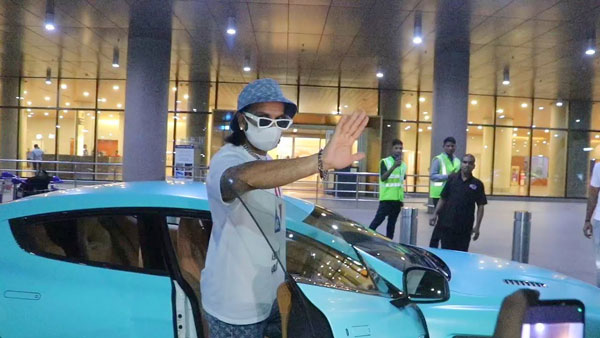 Recently Ranveer Singh has modified his Aston Martin sports car and given it a new color matte aqua blue. The car was earlier painted white and looks even more attractive after the wrap. This color is giving a new look to Ranveer’s sports car and it is getting mixed response from the people when its pictures have surfaced.

This powerful engine provides 552 power and 620 Newton meter torque. It is mated to an 8-speed automatic gearbox, while the car can achieve a top speed of 327 km/h. At the same time, it achieves a speed of 0 – 100 km / h in just 4.2 seconds. This sports car is known only because of its fast speed.

Currently this car is also present with Bollywood actor Hrithik Roshan and he too has been seen riding it many times. Although he bought this car after Ranveer Singh. The Aston Martin Rapide S is a customizable car and the company offers a lot of changes and extra features in it. In this you can add many changes and features as per your choice.

The Aston Martin Rapide S gets double wishbones suspension which makes its drive very smooth. Its four wheels have been fitted with dual cast disc brakes. In terms of safety, this car has been provided with 3-stage DSC, ABS, EBD, brake assist, torque control and airbag along with many other features.

Other Cars of Ranveer Singh

Ranveer Singh also owns a Lamborghini Urus SUV which he is often seen driving. The Lamborghini Urus Pearl Capsule Edition is a fast SUV and is loved all over the world. The SUV that Ranveer Singh has bought is in Arancio Borealis color. Along with this, a glossy black finish has been given to the lower half of the vehicle including the wheel cladding, exterior glass, roof and fenders.

Actor Ranveer Singh is a big fan of cars and in such a situation, he does not lag behind in experimenting with his cars. This modification has been done in Aston Martin’s car looks very attractive. Now we have to wait which new car he adds to his collection.