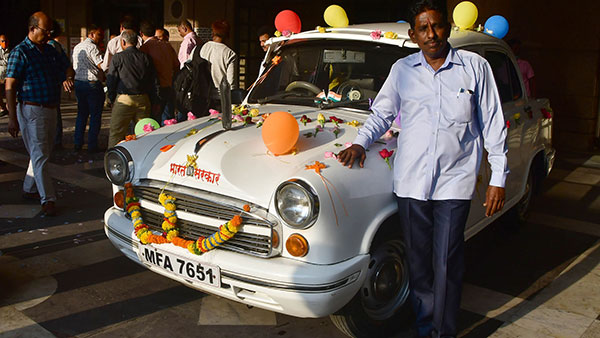 Actually, this last Ambassador car was decommissioned from the Mumbai Central Railway office after 35 years of service. With the decommissioning of the car, the driver of the car, Muthu Pandi Nadar, also retired. This ambassador was appointed on 22 January 1985 in the service of the commercial manager of Mumbai Central Railway. After nearly 35 years of service, both the Ambassador car and its driver retired together.

During their service, 16 commercial managers of Central Railway took the service of this car. Last week Tuesday was the last day of this Ambassador car in the Central Railway Division. Railway employees and officials bid farewell to the Ambassador car with moist eyes. Muthu Pandi Nadar, the driver who had driven this car for 35 years, also retired with it.

The driver of this car, Muthu Pandi Nadar, has many memories attached to this car. The driver said that in 35 years of service, there was no accident with this car even once and this car never stopped even while on the way. The car driver told that he was very fond of this car and used to maintain it along with driving it. On Wednesday, this ambassador car will be sent to the road depot of Central Railway for scrap.

The Hindustan Ambassador was a very popular car in India. This car was one of the most popular cars of the 1970-80s. This car was mostly used as the official vehicle of government officials. The Ambassador of Hindustan Motors was in production for 57 years. It was updated very rarely in so many years.