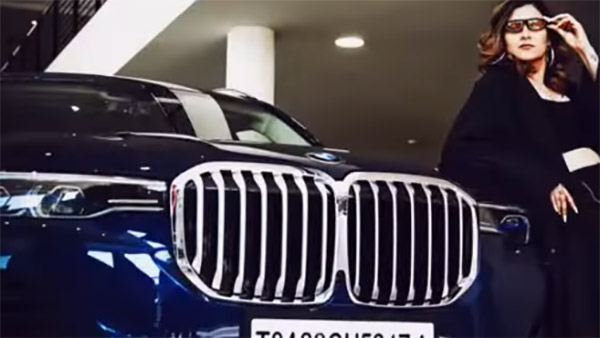 In this video, she can be seen posing and taking her out of the showroom. The BMW X7 is actually the new flagship SUV from the manufacturer. The BMW X7 competes with luxury SUVs like the Mercedes-Benz GLS in its segment. BMW X7 was first launched in India in the year 2019.

It was earlier sold as a CBU and is now being sold as a CKD unit in the Indian market. The exterior design of the BMW X7 has been unmistakably changed. It gets a huge kidney grille up front, with two attractive headlamp units on either side of the grille.

Large alloy wheels have been installed on the side profile, which look good with the overall look of the car. The side profile of the BMW X7 really reveals the true length of the SUV. The rear wraps around the split LED tail lamps and the BMW X7 branding has been given on the tailgate.

The BMW X7 SUV is actually the SUV equivalent of their flagship sedan 7-series. The BMW X7 is a flagship SUV and is feature loaded like any other flagship model. Apart from this, laser headlamps, ambient lighting and panoramic three-piece sunroof have been given in BMW X7.

Apart from this, features like digital instrument cluster, 5 zone climate control, autonomous parking and reclining function for all three rows have been given in this car. The dashboard design of the BMW X7 is virtually identical to other cars in the BMW family.

The layered dashboard gets the latest iDrive system with the company fitted touchscreen infotainment system in the middle. It also comes with a fully digital instrument cluster, multi-function steering wheel, crystal-effect gear lever and voice assistant feature is also available in the car.