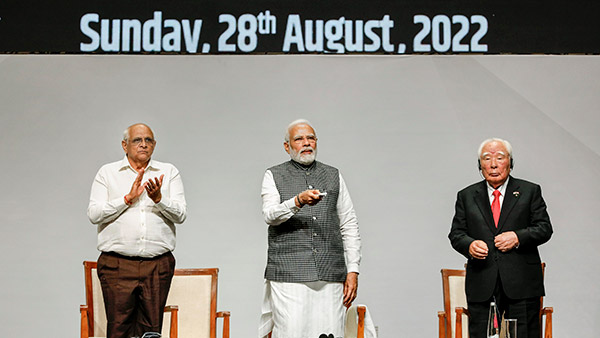 Pointing to the noise-free experience offered by two-wheelers and four-wheelers electric vehicles, Prime Minister Narendra Modi said, “The silence of electric vehicles is bringing about a new silent revolution in the country.”

Speaking at the event of Suzuki Motor Corporation organized to commemorate 40 years of its operation at Mahatma Mandir Convention Center in Gandhinagar, PM Modi said that the Gujarat-Maharashtra bullet train is also an example of India-Japan friendship.

PM Modi remembered former Japanese late Prime Minister Shinzo Abe, saying his effort to bring the two countries (India and Japan) together was incredible. Modi said there are currently over 125 Japanese companies operating in Gujarat, ranging from the automobile sector to the biofuel sector.

Maruti Suzuki has set a target to increase production from the new plant. Presently the company has orders pending for around 4 lakh cars. Maruti is already battling with late deliveries of cars but after the launch of the new Brezza and Grand Vitara, the bookings increased by about 1 lakh units.

Let us inform that Maruti Suzuki Brezza has received bookings of more than 90,000 units, while Grand Vitara has received more than 40,000 bookings so far. Grand Vitara can be launched in India in the month of September. In such a situation, after the launch, its booking can increase even more, due to which the wait for delivery can increase even more.