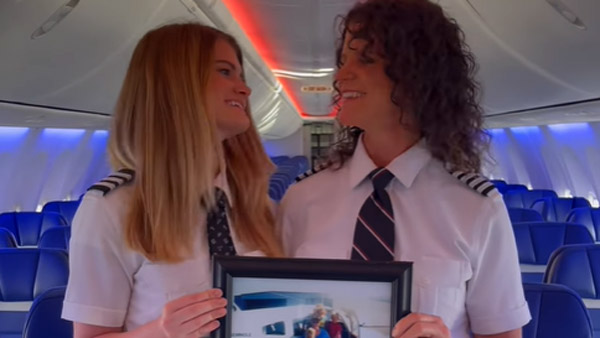 The duo made history by completing Flight 3658 from Denver to St. Louis. The video of both was shared on social media and now it is going viral on the internet. Southwest Airlines shared this video on its Instagram handle.

At the beginning of the video they are shown holding an old photo, which also has the caption “POV: You’re the first mother-daughter duo in the Southwest.” In the video, Captain Holly Petit can be seen sharing the moment with the passengers.

She is expressing gratitude to the passengers for traveling by this flight. “It’s a very special day for us and for Southwest Airlines,” she says. We’re the first mother-daughter duo on a Southwest Airlines flight deck. Thanks to all the travelers for coming here.”

Pilot mother Holly told in a press interview that after graduating from college, she started working as a flight attendant. Slowly his attraction started growing to become a pilot. Being a mother, Holi also took care of her children and during this time she was also taking pilot training.

wanted to become a pilot since the age of 14

Holly told that her daughter Keely enjoys flying the plane as her pilot. Keely wanted to become a pilot since she was 14 years old. In 2017, Keeley obtained a pilot’s license and began her career as a flight intern in a company. Almost a year later, in 2018, he was hired by the company as a pilot.

Social media users are giving their feedback appreciating this video of mother-daughter. People are congratulating them on their achievements and are expressing their desire to travel on such a flight.