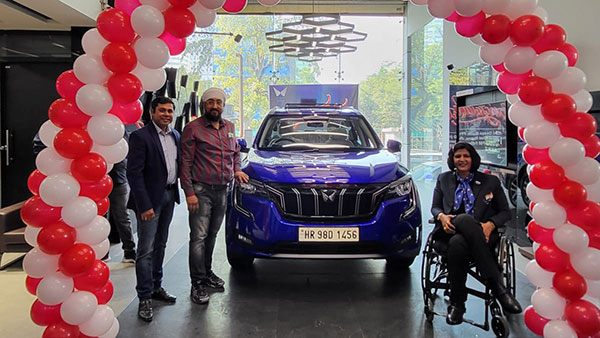 Following his appeal, Mahindra & Mahindra, along with their technical team, modified a Mahindra XUV700, whose seat comes out of the car and can be easily accommodated by disabled people.

The design and functionality of this seat was tested by Paralympic Deepa Malik herself and during that time she thanked Mahindra & Mahindra’s technical team and Anand Mahindra for the change. Now the latest information about this modified Mahindra XUV700 is coming out.

According to the latest information, this Mahindra XUV700, which has been modified for the Paralympics by Mahindra & Mahindra, has been handed over to Deepa Malik. Paralympic Deepa Malik has given this information through a Twitter post.

In his tweet, he wrote, “Thank you anandmahindra, for coming up with this all-inclusive beautiful car! Your team has delivered on the promise you made. It will definitely empower a lot of PWDs and make their lives easier.” Happy to accept this car and look forward to driving it soon.”

The choice of diesel and petrol engines has been given in Mahindra XUV700. It is powered by a 2.2-litre diesel unit that churns out 153 Bhp of power and 360 Nm of peak torque. On the other hand, the 2.0-litre M Stallion turbocharged petrol engine generates 188 bhp power and 380 newton meter torque.

This car comes with manual and automatic gearbox and all wheel drive system. Its crash test report has come out some time back, in which Mahindra XUV700 has achieved 5 star safety. The unit that was crash tested on Mahindra XUV700 was the entry level variant.

It gets two airbags, ABS brakes and ISOFIX anchorages. The testing agency said that the Mahindra XUV700 could be further enhanced by adding features like side body airbags, side head curtain airbags, electronic stability control (ESC), and three point belts in all seating positions as standard features.

The company is selling this car in a total of four variants, which include MX, AX3, AX5 and AX7 variants. Along with this, accessories packs have also been made available to make it even better. The company is delivering an average of 3500 units, the major reason being the lack of chips.

Because of this, some features may be lacking in the Mahindra XUV700, although it will not be officially removed. At the beginning of the year, the price of Mahindra XUV700 has been increased, the company has increased the price of this SUV from Rs 46,000 to Rs 81,000.