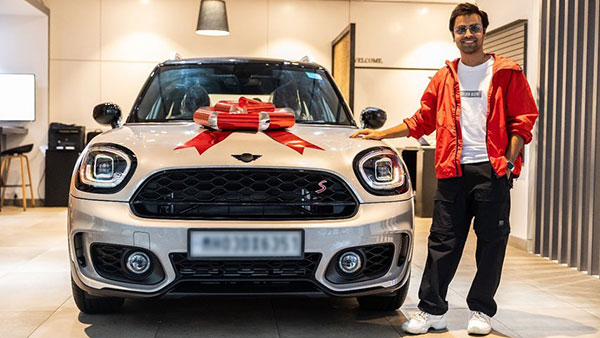 Actor Jitendra Kumar rose to fame with The Viral Fever (TVF) and later appeared in Amazon Prime Video’s ‘Panchayat’ web series. He will be seen in the lead role in Netflix’s upcoming film Magician.

The MINI Countryman is available only in the petrol-engined Cooper S spec with a 2.0-litre turbocharged petrol engine that develops 192 Bhp of power and 280 Nm of torque. The engine is mated to a 7-speed dual-clutch automatic (DCT) gearbox. This car can accelerate from 0-100 kmph in just 7.5 seconds.

The Mini Countryman gets round LED headlamps and tail-lamps with the company’s trademark Union Jack LED motif. The JCW Inspired variant gets a sportier look for the regular Countryman including sportier bumpers, rear spoiler and larger 18-inch wheels as compared to the standard 17-inch wheels.

The Mini Countryman is offered in a choice of five exterior colors – Sage Green, White Silver, Midnight Black, Chili Red and Island Blue. The final color is available only in the JCW Inspired variant. MINI has recently re-opened the bookings for the Mini 3-door Cooper SE Electric.

The MINI Cooper Electric Edition is available in India at a price of Rs 50.90 lakh (ex-showroom). The Mini 3-Door Cooper SE comes as standard with a one-time install fixed charging cable and a Smart Wallbox charger.

Let us tell you that the former Indian cricketer, Yuvraj Singh bought Mini Counteryman for himself in the year 2020. He bought the Counteryman S JW variant for which he paid Rs 42.4 lakh.