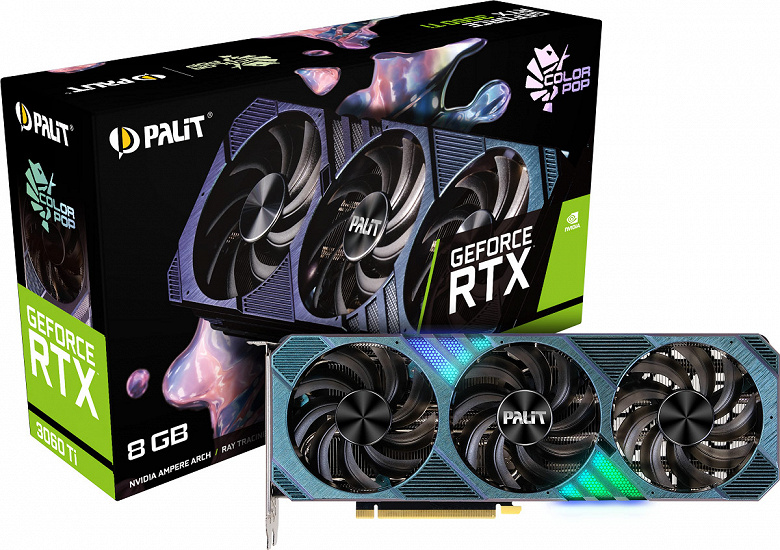 Palit Microsystems has unveiled the GeForce RTX 3060 Ti ColorPOP video card, which the manufacturer himself calls “a delightful work of art.”

A highly visible exterior feature is the glossy metal finish on the cooling system shroud. The Cosmic Latte color chosen for the shroud depends on the lighting conditions and the angle at which the card is viewed. The paint features three basic tones – Chameleon Green, Electric Blue and Ultra Violet, which smoothly replace each other, “creating a shine of bright colors.”

The cooling system hidden under the Palit GeForce RTX 3060 Ti ColorPOP casing is characterized by high efficiency, and at light load, the fans completely stop, making the card virtually silent.

The card is based on a GPU with 4864 CUDA cores. The base frequency of the GPU is 1410 MHz, the increased frequency is 1665 MHz. GDDR6 memory is connected to the GPU using a 256-bit bus. The data transfer rate is 14 Gbps. The memory capacity is 8 GB. The mounting plate contains one HDMI 2.1 output and three DP 1.4a outputs. The video card measures 294 x 112 x 60 mm and is equipped with two eight-pin PCIe additional power connectors. In the case, it occupies 2.7 slots. The power consumption is declared to be 220 W. The manufacturer does not name the price of the novelty.