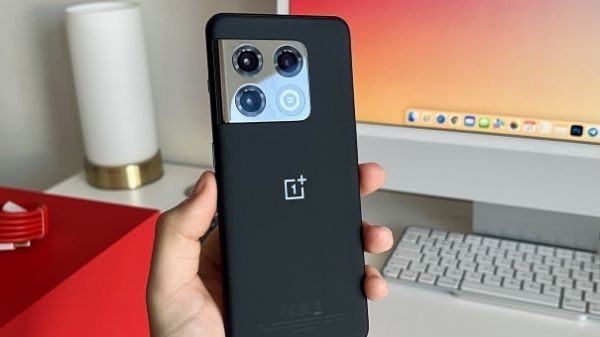 Specifications and features of OnePlus 10 Pro

OnePlus 10 Pro flaunts a 6.7-inch QHD+ AMOLED screen with 120Hz screen refresh rate and 1440 x 3612 screen resolution. The phone comes with a second-gen LTPO panel, which means it can go anywhere between 1Hz to 120Hz. The phone also supports Always-on-display. This 10 Pro is powered by Qualcomm’s Snapdragon 8 Gen 1 SoC and comes with up to 12GB of LPDDR5 RAM and 256GB of UFS 3.1 internal storage. While there is no slot for microSD card in it.

In the camera department, you get a triple rear camera setup with a 48MP main sensor (Sony IMX789), a 50MP ultra-wide secondary lens with 150-degree FoV, and an 8MP telephoto snapper with 3.3x optical zoom. The cameras come with dual optical image stabilization. The camera supports 12-bit RAW, HDR, Movie Mode, Raw Pro Mode, and the OnePlus Billion Color feature. For selfies, 32MP camera support has been provided at the front.

OnePlus 10 Pro packs a massive 5000mAh battery, which supports 80W SuperVOOC fast charging and 50W AirVOOC wireless charging. And with this you will also get an 80W charger. The phone also supports reverse wireless charging. 80W wired charging takes around 32 minutes to fully charge the device via the Type-C port.

Talking about the software, the device runs on OxygenOS 12 based on Android 12 in India. Talking about other features, then the phone has an in-display fingerprint scanner, dual stereo speaker setup, alert slider, X-axis linear motor, Bluetooth 5.2, NFC, 2 x 2 MIMO, dual-band Wi-Fi, O-Haptics, Hyperboost mode, VoWiFi and VoLTE are included. So if you also want to buy a premium smartphone, then you can think about it.