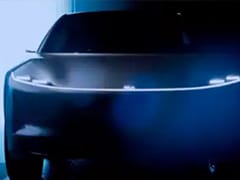 Ola Electric has shown a sneak peek of the interiors of the upcoming electric car. It has a unique and modern design steering wheel. The two-spoke design features jet-style steering mounted controls with the OLA logo in the center. It has cameras instead of rearview mirrors, which will help in aerodynamics. In the middle is a large infotainment screen that can be over 12 inches. The layout of the dashboard is good looking and it also gets ambient lighting.

On the exterior, there is an open space on either side of the front bumper to supply air to the front brakes. It gets an LED strip along the entire width of the front with the bonnet, while the LED DRL units have been reduced to just two strips on each side. Its back side is almost identical to the front. It gets large surfaces for the bumpers and rear fenders, which have LED strip tail lights. company It is said that this electric car will be able to give a range of more than 500 km on a full charge. It will catch the speed of 0-100 kmph in just 4 seconds. However, the company has not given information about its battery and powertrain.

The company has launched electric scooters Production Along with this, it has also planned to increase the capacity of its factory to meet the demand in the coming years. The company’s current production is more than 1,000 electric scooters per day. The company’s CEO, Bhavish Aggarwal has said that the company’s factory in Krishnagiri, Tamil Nadu will be expanded. “We believe that in the next six to eight months the existing capacity will be filled,” he said. He added that Ola Electric has sold over one lakh units since foraying into the segment last year. The company’s current capacity is 20 lakh units per annum.