Ola scooter stopped after walking only 50 kms, had to resort to Hero’s bike to take it home 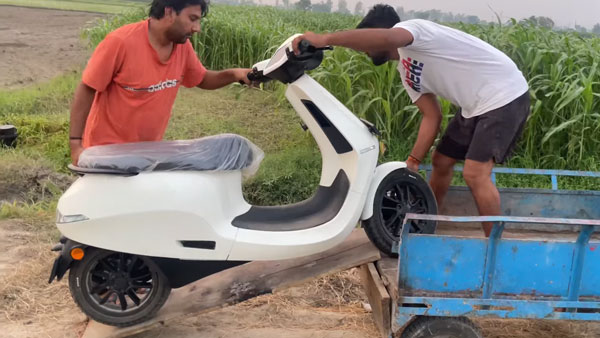 Recently, another video related to an Ola electric scooter has surfaced on social media, in which a customer’s new Ola S1 Pro scooter automatically shuts down after which he had to be taken by a bike trolley. As per the video, the customer had bought the white colored Ola S1 Pro electric scooter a few days back. This scooter is not starting now after running only 50 kms.

Closed after walking only 50 kms

It is being told in the video that the customer had put it on a stand on the side of the farm after traveling 50 km on a full charged scooter. At that time the charge of the scooter was reduced to 55 percent. But when he tried to drive the scooter again, the handle of the scooter got locked and it would not start. However, the video does not provide proof of the scooter driving 50 kms.

The footage further shows that a trolley is called to carry the abandoned Ola scooter which was attached to a Hero CD Deluxe bike. After a lot of effort, the scooter is mounted in a small trolley after which the customer takes it home.

Many complaints are being received from Ola scooters

This is not the first time that the customer has faced trouble due to the discontinuation of Ola scooters. Ola has been receiving a lot of complaints from the customers of S1 Pro. Customers are complaining about the range, build quality and malfunction of the electric equipment.

Ola claims that the S1 Pro electric scooter has a range of 200 kms but very few customers have achieved this range. The company had informed the customers that with the update of Ola Move2OS, the problems related to the range of scooters will be resolved. Apart from this, in the new OS update, the company is also adding some additional features to the scooter.

Let us tell you that in the early months of this year, cases of fire in some of Ola’s electric scooters were also reported. A video of an Ola scooter parked on a roadside fire in Pune went viral on social media, following which the central government took cognizance and constituted an inquiry committee to find out the reason behind the fire in the scooters.

This inquiry committee found that many popular scooter companies in India are manufacturing scooters of poor quality. Apart from this, faults have also been found in the battery management system of all the scooters tested. The committee pointed out that due to lack of cooling or vent system in the battery compartment, the batteries are overheating due to which they are catching fire.