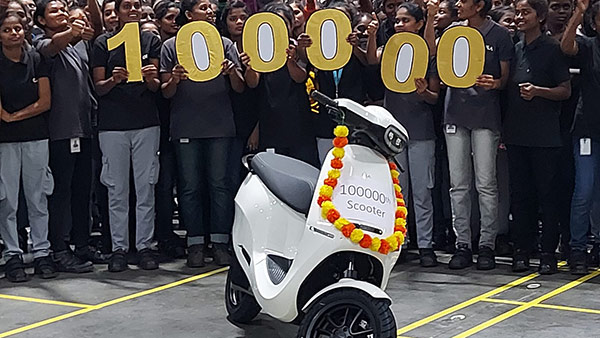 Giving information about this, Bhavish Aggarwal, CEO, Ola Electric, tweeted that, “Crossed the 1 lakh vehicle production mark just yesterday. In just 10 months of production, probably the fastest for which new auto company in India.” Along with this, they have also released the 1 lakhth unit picture, this scooter has been kept in white color.

Ola Electric has sold 20,000 units of electric scooters in the month of October 2022 which is 60% more than the previous month. Announcing the sales figures, the company’s CEO Bhavish Agarwal said that this is the highest figure for any Indian EV company. The sales figures have improved due to better production of the company.

The company had earlier informed that they are producing 1000 units/day electric scooter. This has been the best performance of the EV two wheeler manufacturer in India with the company. The company recently launched the S1 Air but its sales have not started yet. The Ola S1 model was introduced in the month of August and sales have improved since its arrival. This scooter has been launched at a price of Rs 99,999 (ex-showroom).

Ola Electric has launched its cheapest electric S1 Air, priced at Rs 79,999. The sales of Ola S1 Air will start from February 2023 and its delivery will start from April 2023. This electric scooter can be booked for just Rs 999. Ola S1 Air is going to come with the latest OS update from the beginning.

Ola has added some new features to both its scooters in the update of Move OS3, which the company had promised during the launch of the scooters in August 2021. Features such as call and message alerts, advanced regeneration mode, mood, profile, party mode and hypercharging have been added to the Move OS 3. Apart from this, features like Hill Hold Assist, Widget, Document Storage, Vacation Mode, Hazard Light and Ride Report have also been updated.

Ola Electric had some problems initially in production but now the company has improved the production. In such a situation, Ola Electric can set many new sales records in the coming days.