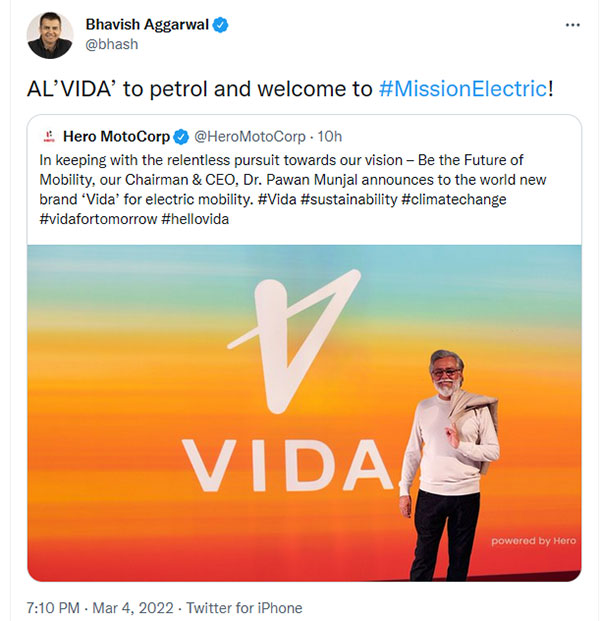 Hero MotoCorp is going to launch the first electric scooter under the Vida brand on July 1, 2022. Hero MotoCorp Chairman and CEO Dr Pawan Munjal has revealed the brand logo of Vida on the social media handle of the brand. It will be manufactured at the company’s ‘green’ manufacturing facility in Chittoor, India. The company has told that its delivery will also start a few days after the launch of this electric scooter.

In fact, a customer made a tweet to show off his electric vehicles, in which he is also showing off his new Ola electric scooter, the Nexon EV. Both his vehicles are electric and are in black color, due to which he wrote that my black EV family is complete. To this the CEO of Ola Electric said that the next car should be Ola’s electric car.

Ola has launched its two-wheeler in the electric vehicle market of India and now with the launch of the electric car, the company is going to make a big debut in the electric four-wheeler market as well. Ola had revealed a few months back that it would roll out the HyperCharge network across India. In this project, the company will create more than one lakh charging points in 400 cities of India, which will cost more than $2 billion.

This HyperCharge network will have two formats – vertical tower based charger and standalone charger. Electric vehicles can be parked and charged in the vertical tower charger, while the standalone charger will be installed in public places like IT parks, shopping malls and cafes etc. Ola company will also give charger to the customers along with its scooter, which the customer can install at his home.

However, the company is struggling with chip shortage due to which it is not able to produce the base variant of its electric scooter and its production is to be done by the end of next year. The company is also going to deliver the S1 Pro version to the customers who buy the S1 for this reason. Recently, the CEO of the company has given this information by tweeting.