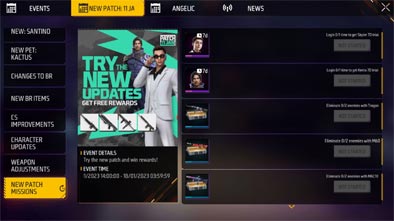 OB38 Update: According to the developer of Garena in Free Fire Max, the patch update of OB38 is going to be added on January 11, 2023. As per the same schedule the server has been taken down and the work has been started by the developer. Like every time the server is down and can’t access the game for a few hours.

However, the patch update is rolling out live inside the game. As per the last several updates players get items for free. Well, in this article, we are going to take a look at the list of free items available in the OB38 update for Free Fire Max.

The developer of Garena Free Fire Max has released a poster to launch the OB38 update, which is going to add the latest update to the game on January 11, 2023. Maintenance break has started as per schedule.

At present, the maintenance break has started from 9:30 AM and will continue to run till 5:30 PM. If the developer needs to extend the time, then they will share the information with the official account.

The developers of Garena have announced a new patch mission. Attractive prizes are going to be available in this. Players can claim rewards for free by completing missions.

These rewards are going to be available to the players till 18 January 2023: