Now the front wheel of Ola S1 Pro scooter broke apart, recently there was a case of fire 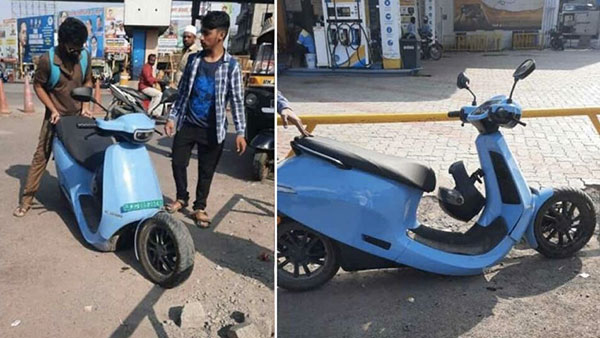 It can be seen in these pictures that the Ola S1 Pro electric scooter, which is parked on the side of the road, has badly broken front suspension and wheels. However, no information has been received about the exact location and cause of this unfortunate incident at the moment.

It can be seen in the pictures that this Ola S1 Pro is in the blue shade and its front suspension has been separated from the scooter and its wheel is lying forward. This damaged Ola S1 Pro is standing on the side of the road. No information has been revealed about what is the real reason behind such a big mess.

However, according to some people, there can be two possibilities behind this incident. Where some people say that this scooter must have encountered a big stone, due to which the front part was completely damaged or the front part of this scooter broke on its own when the owner of the scooter drove it in a busy road Had been.

Both Ola Electric and the scooter owner have not yet given their official statement regarding this incident. While the front part of this scooter appears to be badly damaged, it can also recover from repairs and it just needs a significant repair work.

Several owners of the scooter, who have bought it, have complained about low quality body panels, inconsistent fit and finish levels and software glitches. Some owners even received their scooters with broken body panels, which is one of the worst delivery experiences a customer faces while buying a new vehicle.

Let us tell you that it is not just the inconsistent build quality issues that are putting the Ola S1 Pro down in the public eye, but this electric scooter recently came into the limelight for technical glitches as well. An Ola S1 Pro parked on the roadside in Pune caught fire on its own, causing the scooter to burn to ashes in no time.