Now petrol and diesel are being gifted at weddings, this couple was gifted by their friends 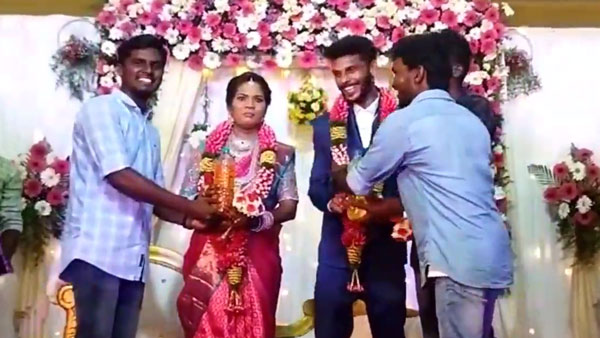 This case is from the state of Tamil Nadu, where during the wedding of a newly-wed couple, their friends have given petrol and diesel bottles to the couple as wedding gifts. His friends also made a video of the newly-wed couple giving this gift and shared it on social media.

In this video going viral on social media, it can be seen that a group of youth are gifting a liter of petrol and a diesel bottle to the newly wed couple on their wedding day, which is a lot in itself. It is unique.

It is being told that this video is from Cheyur village in Chengalpattu district of Tamil Nadu. After posting on social media, this video has become increasingly viral and has become the center of attraction for many viewers. So far hundreds of people have seen and shared this video on social media.

This idea came to the mind of the friends of the groom Grace Kumar and the bride Kirtana. For your information, let us tell you that in the last 15 days in Tamil Nadu, the prices of petrol and diesel have increased by more than nine rupees. After this increase, now petrol is being sold here at Rs 110.85 and diesel at Rs 100.94 per liter.

Talking about Saturday, April 9, the price of petrol was seen to be stable for the third consecutive day and the price of diesel also did not increase. However, still the price of petrol in Mumbai remained at a record high of Rs 120.51. The last time petrol prices were increased by 80 paise per liter on Wednesday.