Nissan Magnite Vs Renault Kiger: Know the basic difference between the two cheapest SUVs in the country, will help in buying 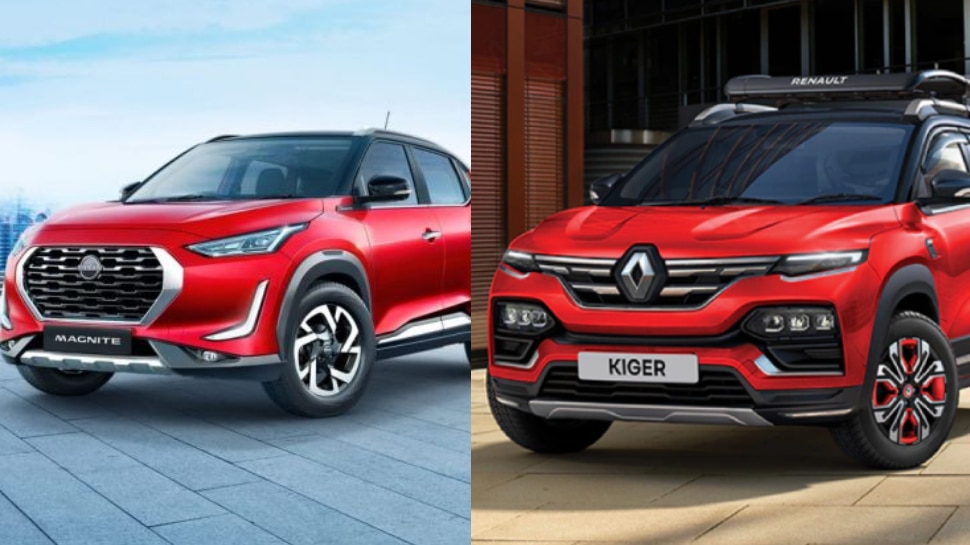 Specifications and Features of Nissan Magnite Vs Renault Kiger

Two petrol engine options are available in the Nissan Magnite. It comes with a 1-litre naturally aspirated engine (72PS/96Nm) and another 1-litre turbo-petrol engine (100PS/160Nm). The customer can choose any of the two options. It also gets the option of a CVT with a 5-speed manual transmission. The SUV gets 8-inch touchscreen infotainment system, wireless Android Auto and Apple CarPlay, 16-inch dual-tone alloy wheels, LED DRLs, LED headlamps and auto AC. It also comes with rear vents. It also gets features like wireless phone charger, air purifier, JBL speaker, ambient lighting, 360 degree camera and puddle lamp.

On the other hand, the Renault Chiger also gets two engine options. It also gets a 1-litre naturally aspirated (NA) petrol engine (72PS/96Nm) and a 1-litre turbo-petrol (100PS/160Nm) engine. The naturally aspirated engine gets the option of 5-speed manual and AMT. At the same time, the option of CVT is also available in the turbo-petrol engine. Talking about the features, it gets features like 8-inch touchscreen infotainment system, wireless Android Auto and Apple CarPlay, auto climate control, push-button start/stop. It also comes with wireless phone charging and cruise control.

Nissan Magnite price starts at Rs. 5.97 Lakh and goes up to Rs. 10.79 Lakh. At the same time, the price of Renault Chiger is between Rs 5.99 lakh and Rs 10.62 lakh (ex-showroom, Delhi). In such a situation, it can be said that there is only a slight difference in their price, which may not even be taken into account by the customer at the time of purchase because when you are spending lakhs of rupees, then the difference of one or two thousand rupees will not make any difference. does.