Next-Generation MINI Cooper SE is in the works, the company released the teaser 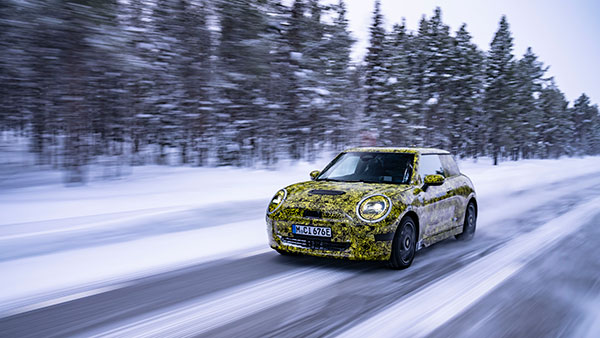 The company is also working on the next generation of its all-electric version and has released a teaser for it. The car is being tested at the BMW Group’s Winter Test Center in Arjeplog, Sweden. It can be seen in the pictures that this car has been completely camouflaged.

But it can be seen that it is very similar to what we saw from its internal-combustion-engined counterpart in the pictures that surfaced earlier. It retains the company’s signature circular headlights and front grille, although its overall silhouette looks a bit more rounded than before.

Talking about its rear part, it gets a little sneaky, so it can be seen that most changes have been made in this area. For example, the earlier images of the standard model featured new tail lamps (except for the union jack signature) with a modern design.

The new MINI Cooper SE is believed to get a facelift on its ICE model, possibly with a closed grille and EV-specific accents. The teaser images don’t reveal much about the cabin, although the earlier images suggest that it will be a clean cabin.

This means that the digital driver’s display and infotainment system are being integrated through a large circular screen that will also use a heads-up display. Features such as dual-zone climate control, ambient lighting, a branded audio system, powered front seats and ADAS can be expected as features.

Changes are also being expected in its hood, although the company has not given any information about it. The electric motor of the current-gen MINI Cooper SE is powered by a 32.6kWh battery pack. Its motor makes 184 bhp power and 270 Nm torque.

The car can accelerate from 0 to 100 km/h in just 7.3 seconds and has a top speed of 150 km/h. Talking about the range, it can cover a distance of up to 270 km on a single charge. For the standard model, it is expected to be offered with petrol, diesel and plug-in-hybrid engine options.