New teaser of the new Maruti Suzuki Baleno Facelift released, a glimpse of the new taillight 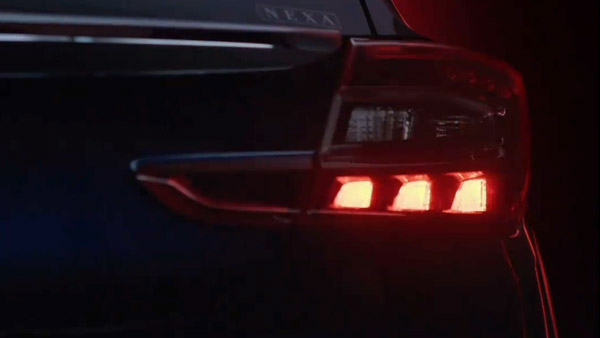 Apart from its revised front and rear fascia and interiors, the premium hatchback gets new features like a head-up display. It is expected that the price of the new Maruti Baleno Facelift can start from Rs 7 lakh (ex-showroom). In the market, it competes with Hyundai i20 and Tata Altroz.

Each of the new Maruti Baleno Facelift headlights gets three LED elements for the Daytime Running Lamp (DRL). The indicator lights look like a regular bulb, but the headlights themselves could be the same LED projector unit as before.

A glimpse of the projector lights is seen in the teaser video released by the company. At the rear, the Facelift Baleno gets new split tail lamps with running lights made up of three LED elements that mimic DRLs.

Despite the dim light in the teaser video, a glimpse of the multi-reflector reversing lamp and indicators can be seen using the regular halogen bulb. Apart from this, the Maruti Baleno Facelift also brings a new heads-up display to its equipment list.

Translucent display is not available in other premium hatchbacks. It seems to be configurable, with various settings that show you engine rpm and fuel efficiency figures, in addition to timing and vehicle speed. A new design has been given in the interior of Baleno.

A floating infotainment screen has been used in its dashboard. You also get a new steering wheel with steering mounted controls and a cruise control system. The Baleno facelift will compete with the Hyundai i20, Tata Altroz, Honda Jazz and Volkswagen Polo after launch.

Maruti will not change the engine of the new Baleno. Currently, Maruti Baleno is made available in one engine option in India. The first is a 1.2-litre engine that churns out 83 Bhp of power and 113 Nm of peak torque. This engine comes with 5 speed manual and CVT gearbox.

The 2022 Baleno gets new body panels which are made from better steel. The front part has been given a completely new design, it has been given mesh grille, along with the headlight and LED DRLs have been given with the rear design.

It gets a bigger bumper, wider air dam and circular fog lights. The bonnet has also been redesigned and it feels flat compared to before. Talking about the rear, a redesigned tailgate, L-shaped taillight cluster and LED internals and a new bumper have been given.

Talking about the side part, the design has been kept the same, although new alloy wheels can be seen in it. Along with making it attractive, the company is going to bring with many attractive features and equipment. A new dashboard is to be given in its cabin.