New teaser of new Toyota Glanza released, will be launched in the Indian market soon 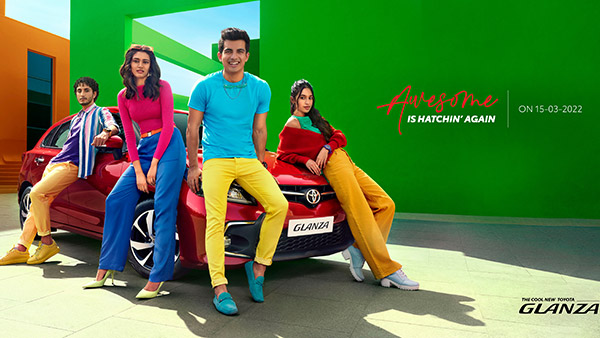 This model is based on Maruti Baleno and recently its new model has been brought, due to which a new model of Glanza is being brought now. But the company has made many changes in it different from Baleno, due to which it is going to look different. The company is going to bring it to the Indian market on 15 March 2022 and its booking has started unofficially by many dealers.

Along with this, 6 airbags, electronic stability control can be given in it. The upholstery can be kept in a new colour, though the dashboard will be kept the same as the new Baleno. It will also get free standing touchscreen, new control buttons, new instrument cluster buttons. On the other hand, like Baleno, new features like heads up display, 360 degree camera etc can be given in it, it is also going to be more secure than before.

Like the Baleno, engine changes can be made in this too. The 1.2-litre DualJet petrol engine can be given in the Toyota Glanza, which comes mated to a 5-speed manual gearbox and AMT gearbox. The company can keep its variant option limited as before and make it available in the option of mid and top variants only.

While most of the dealers have sold their inventory, only a few are offering the hatchback with attractive discount offers. This has been a successful model of the company and has been well received by the customers, it is to be known that it is manufactured by Maruti Suzuki itself and then sent to Toyota dealers. It has become one of the best selling cars of the company.

This model of the company has received a great response from the Indian customers and is going to bring a new update. Now it has to be seen what other updates the company brings and how much the price increases.