New teaser of Jeep Meridian released, see how this new SUV will be 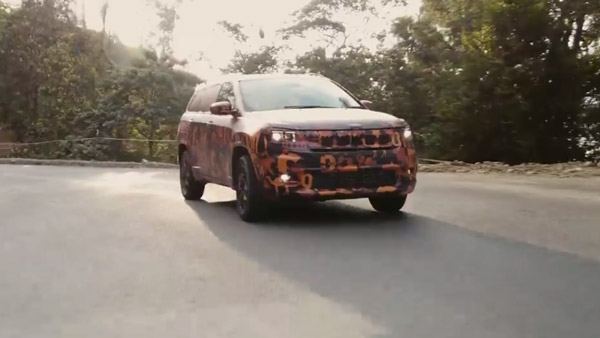 This SUV can be launched in the Indian market by the middle of 2022. The SUV is going to be a three row, massive body-built with stretched window lines and rear section. According to the video that surfaced, this SUV will use the signature 7-slat grille with chrome accents. Apart from this, rectangular-shaped LED headlamps with integrated DRLs, a wider bumper with wider air-inlets and a clear bonnet will also be seen.

Prominent wheel arches will be given in this SUV with newly designed U-shaped alloy wheels. The 2022 Jeep Commander gets a flat roof, long rear overhang, an upright tailgate and horizontal LED taillamps, which add to its muscular look. Its rear profile has been kept similar to that of the Jeep Grand Cherokee and Wagoneer.

The interior of the new 2022 Jeep Commander looks more premium than the Jeep Compass. Talking about the features, it will get 10.1-inch touchscreen infotainment system with wireless smartphone connectivity, fully digital instrument cluster, ventilated seats with Amazon Alexa support and premium upholstery. Apart from this, automatic climate control, panoramic sunroof and many other features will be given in this SUV.

It is believed that ADAS i.e. Advanced Driver Assistance System can also be given in the new Commander. It will be made available with 6 and 7-seating configurations. The new 2022 Jeep Commander i.e. Jeep Meridian can be launched in the Indian market with a 2.0 liter, 4-cylinder Multijet diesel engine. This diesel engine provides power of 200 bhp.

This engine can be mated to a 6-speed manual or a 9-speed automatic gearbox. In its higher variant, the company can exclusively use the 4X4 drivetrain system. In the global markets, the new Jeep 7-seater SUV will be offered with a 2.0-litre diesel engine. Mild hybrid technology will also be used with this engine.

The company has launched the facelift model of Compass SUV, the company is now going to bring Trailhawk in the Indian market. It can be launched by February-March. The company is going to produce it in limited numbers. Like the pre-facelift model, the Compass Trailhawk will be offered with total and off-road focused hardware, which includes a different 4-wheel-drive system to the standard Compass.

The Jeep Meridian is the company’s SUV completely built in India. In such a situation, it will be interesting to see how much this SUV is going to cost. At present, it can give tough competition to the trend of 7 seater vehicles.