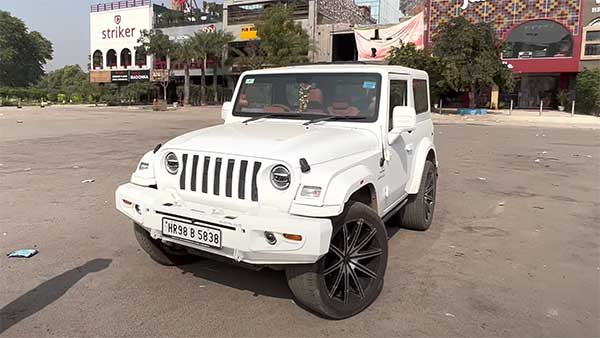 In this video the owner of Mahindra Thar is troubled by the problems faced by his new modified Thar. He spent a whopping sum of Rs 12 lakh for an aftermarket modification of his Thar, which is an incredibly large number for a car modification. But after a few months, problems started appearing in the car.

In the video, the car owner explains that the aftermarket audio system installed on the A-pillar inside the car has developed cracks. Apart from this, the signs of rusting are also visible in different parts of the car. The car owner says that there is a feeling of something sticky on the glass of the instrument cluster. Apart from this, the USB ports installed in the car are not working and the horn sounds when you push hard.

However, the most shocking part is the changes made to the transmission of the SUV. This is a Thar with an automatic gearbox. A few days after the modification, the gearbox started having problems. After taking the vehicle to the service center, it was found that the bolt inside the gearbox has been replaced.

According to the car owner, the modifier lost the original bolt and installed a different bolt without informing the owner. It cost the owner Rs 13,000 to get it repaired, while the car modifier refused to pay. Apart from this, the marks on the windows of the car are also clearly visible.

So if you are buying a new car and planning to get it modified from outside market, then make sure that the company that modified the car does not have a bad track record. Car modification is very expensive and it also changes the original design of the car which can also void the warranty.