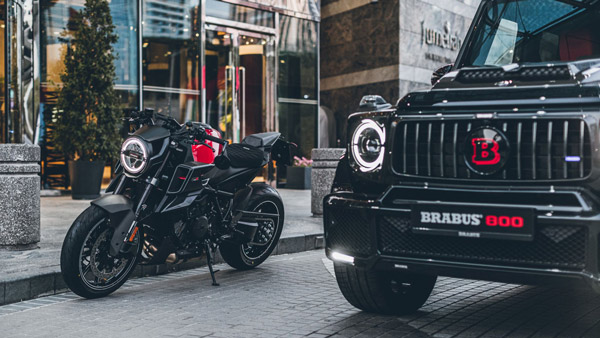 There are a few major-specific changes on the exterior, which give it an all-out distinctive appeal. Aesthetically, the Brabus stands out with its unique design, which is nothing like its donor model. Up front, it gets a round headlamp surrounded by an angular nacelle.

On the other hand, the Super Duke gets a sharper and sharper front end design like the rest of its body panels. The Brabus tank gets large air intakes with winglets and the design of the tank is reminiscent of the Diavel muscle cruiser from Ducati.

Unsurprisingly, most of the body panels of the motorcycle are made of carbon fiber. Apart from this, components like footpegs, CNC brake and clutch lever and nine-spoke alloy wheels are quite unique to the bike. However, the Super Duke’s five-inch full-colour TFT instrument cluster is maintained as it is.

Smartphone connectivity feature is also available in this unit. Talking about the engine, it gets the same 1,301cc, twin-cylinder, liquid-cooled engine, which is known to provide maximum power of 180 bhp along with maximum torque of 140 Nm. .

A six-speed gearbox is used with this engine and a bi-directional quick shifter is also available as standard. Apart from this, other major rider aids and safety features are also available on the motorcycle.

These features include traction control, engine brake control, cruise control, multiple riding modes and more. Apart from the engine and features, the suspension kit of the bike also remains the same. It uses the WP Apex suspension setup and comes with Brembo Stylema brake calipers for braking.

The Brabus 1300 R will be produced in a limited manner and only 154 units of the bike will be manufactured. As far as its price is concerned, it is being sold for GBP 34,549 i.e. around Rs 35 lakh, which is more than the donor model.

Recently, KTM has confirmed that it is working on an electric motorcycle named E-Duke. It is also revealed that the bike will be powered by a 10kW motor and will have a 5.5kWh battery pack. Currently, the most powerful electric bike in India is the Tork Kratos R, which uses a 9kW electric motor.

Compared to vehicles like the Torque Kratos R (4kWh), Simple One (4.8kWh) and Ola S1 Pro (3.97kWh), the E-Duke’s fixed battery pack has the highest capacity. Although, all these electric vehicles are already available in the market, but the launch of E-Duke may take some time.

KTM said that its launch date has not been decided yet. At present, the company has not started testing the E-Duke, so its design information is not fully revealed yet. The design base of the E-Duke is expected to be shared with the Husqvarna E-Pilen.