Neither car nor bike, the police of this country is running on Mahindra’s e-rickshaw! 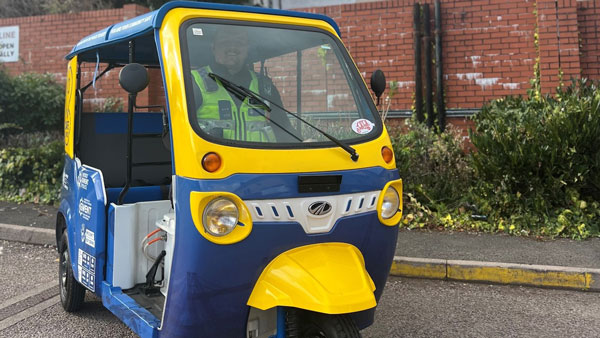 This tuk-tuk is of great use

According to the report, the purpose of running the electric three-wheeler by the police is to provide immediate help and other facilities to the people of the city. The police help the people by reaching by electric tuk-tuk based on the complaint by the people. According to the police, if someone complains about not being safe, then the police themselves bring this tuk-tuk to get them out of that area. Apart from this, the police bring this electric rickshaw for first aid in case of an accident somewhere in the city.

Mahindra Trio three-wheeler price starts from Rs 1.69 lakhs and goes up to Rs 2.79 lakhs for the top variant. The Treo is based on the company’s NEMO platform. This three wheeler generates 8 kW of power and 42 Newton meter torque. In this, the company has used an advanced lithium-ion battery of IP65 rating.

It has a battery life of 1.50 lakh km and is a maintenance free vehicle. Mahindra Trio can be charged with a socket of 15 amps. The company claims that it saves Rs 60,000 per year as compared to a diesel auto-rickshaw.

The company, with a market share of 73.4 per cent in the last financial year, is the country’s largest electric 3-wheeler manufacturer and has registered a significant sales growth of 214 per cent in the previous financial year period. Mahindra Electric is selling the Trio Passenger, Trio Cargo, E-Alpha Mini and E-Alpha Cargo in the three-wheeler range.

Talking about Mahindra’s electric vehicles, the company has revealed its upcoming electric SUV XUV400. It is going to be an affordable electric SUV from the company that will compete with electric cars like Tata Nexon EV, MG ZS EV, Hyundai Kona EV in the Indian electric car market. The XUV400 has a range of 456 km on a full charge. The company will launch it in India next year.