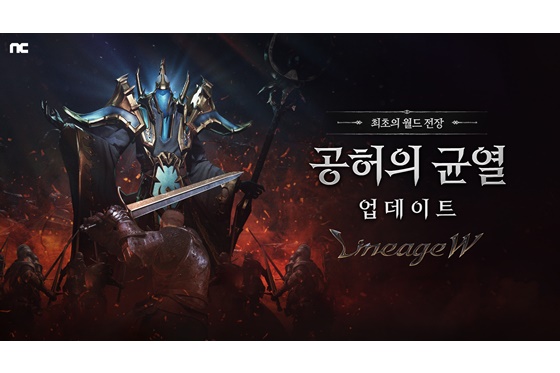 NCsoft (CEO Taekjin Kim) announced on the 5th that it has applied the first world battlefield ‘Rift of the Void’ to the multi-platform MMORPG ‘Lineage W’.

‘Void Rift’ is a large-scale battlefield where all clans from 12 servers in the world can participate. NCsoft plans to introduce world battlefields and world exchanges such as ‘Ivory Tower’ and ‘Tower of Pride’ in the future.

NCsoft emphasized, “‘Lineage W’ was developed with the goal of realizing world-level battles from the planning stage.

You can enter ‘Void Rift’ using the portal in the wizard lab in the game or through the special dungeon menu. Characters of level 50 or higher can enter and can play for up to 7 hours per week.

‘Void Rift’ consists of two layers. If you defeat the elite monsters on the first floor, you can get a key that can move to the shaman room, library, and magic doll storage.

The boss monster ‘Twisted Eort’ appears every Friday, Saturday, and Sunday at 10 PM, and you can get the legendary weapon ‘Void Bow’ and hero grade armor when attacking.

The 2nd floor can be accessed using the four portals on the 1st floor of ‘The Rift of the Void’. Every Saturday at 8:00 PM, the boss monster ‘Arch Wizard Hardin’ appears, and when attacked, ‘Hardin’s Staff’ and ‘Faith Guarder’ are obtained. In addition to boss monsters, if you defeat the monsters that appear in the Void Rift, you can obtain Rift Emerald and Topaz Earrings.