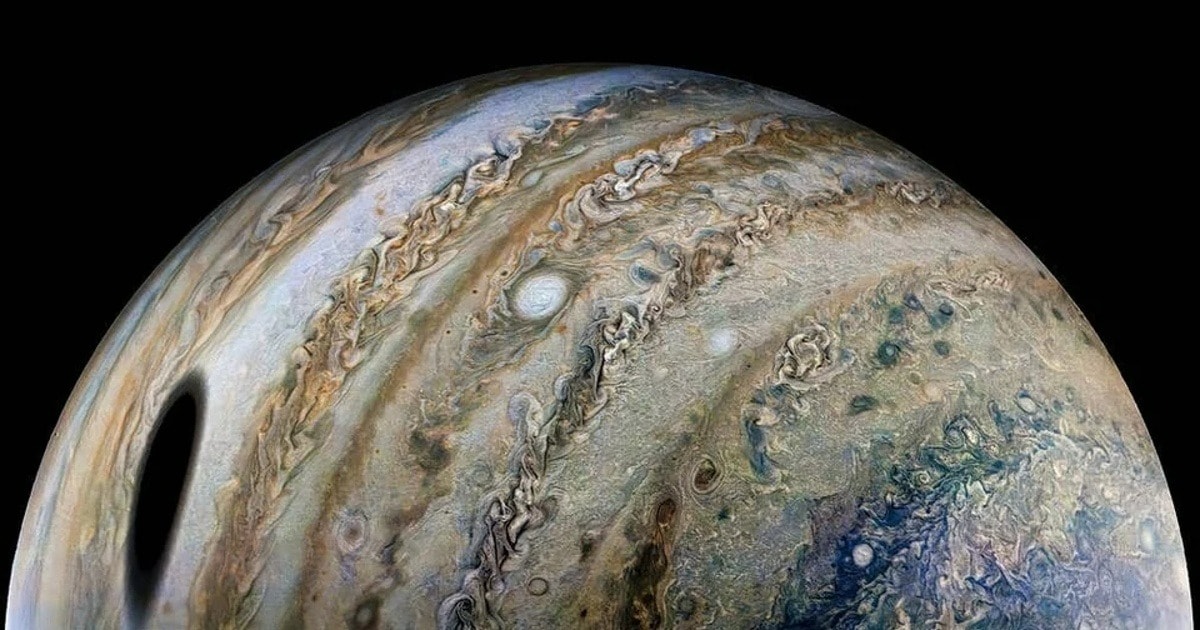 America’s space agency NASA’s Juno mission flew near Jupiter for the 40th time on February 25 this year. It captured images of Jupiter and one of its largest moons, Ganymede. These images were then sent to Earth where scientists recreated the images based on the JunoCam instrument.

One of these images is being released every day by NASA. This time the image is showing a spectacular view of Jupiter’s Ganymede Moon. In the information provided with this image NASA reported, “During the 40th flight near Jupiter, the Juno spacecraft observed Ganymede forming a large and dark spot on the planet. JunoCam captured this image very close to Jupiter. This makes Ganymede’s shadow appear particularly large When this image was taken, the Juno spacecraft was about 44,000 miles above Jupiter and about 15 times closer to the planet than Ganymede.”

Due to the high radiation on Jupiter, the image captured along with the spacecraft is also affected. Total eclipses occur more on Jupiter than on Earth. The main reason for this is Jupiter’s four large moons, which often pass between Jupiter and the Sun. NASA’s Juno Mission It has been sent to understand the weather and other conditions on the largest planet of the Solar System. It entered Jupiter’s atmosphere about six years ago and has been flying close to the planet ever since. It has given some exciting information about the planet.

The James Webb Telescope, the largest telescope sent into space, is surprising the world with its pictures. Recently this telescope has captured a detailed picture of the Pillars of Creation. Seeing this, it seems as if some construction is going on in space… some big construction. NASA has told that there are huge structures of gas and dust filled with stars in the picture. This image was jointly released by NASA and the European Space Agency ESA. NASA said that the James Webb Telescope took this shot of the Eagle Nebula 6,500 light-years away from Earth. These pillars were first captured by NASA’s Hubble Space Telescope in 1995, but due to the infrared capability of the James Webb Telescope, this image has been captured more closely.