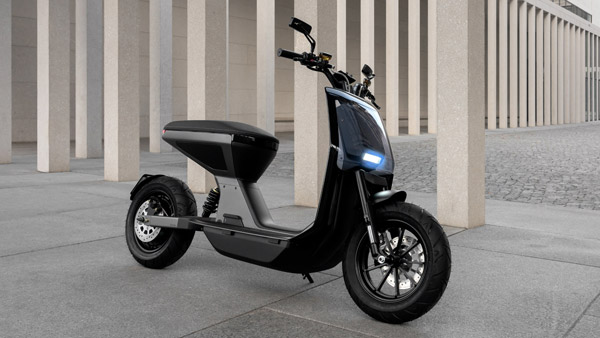 Naon, an electric vehicle (EV) startup based out of Germany, has introduced its first battery-powered two-wheeler called the Zero One. Since this is just a pre-production prototype, the electric scooter is not yet available for pre-booking.

Naon has taken an unconventional but minimalist approach to the Zero One, which has very few body panels. Its overall design is clean and understated, while its geometric proportions make the scooter sharp. Some of its styling highlights include a flat single-piece seat.

Apart from this, it gets a tall and flat footboard, naked handlebar, an open rear swingarm and a windshield upfront. Another unique piece of styling is a rectangular single bar LED headlight mounted on the windshield to go with a sleek tail light setup under the seat.

The thick floorboard also houses the battery pack, which gives the scooter a very low center of gravity, which translates into good ride stability. Coming to the battery pack, the Naon Zero One is powered by a removable 2.4 kWh lithium-ion battery, which offers a range of 70 km on a single charge.

By adding an additional battery pack, this range can be increased to 140 km on a single charge. However, both the variants of the electric scooter offer different levels of performance. Its base L1e variant gets a maximum output of 3 kW, which offers a top speed of 45 kmph.

The Naon Zero One is underpinned by an aluminum frame, which comes with a USD fork upfront and a mono-shock at the rear. The frame and body panels are made of sustainable materials, which can be recycled.

Braking duties are handled by disc brakes at the front and rear, which are used with ABS feature. In terms of features, the Naon Zero One comes with a dedicated instrument console, but instead uses the rider’s smartphone, which is mounted on the handlebar, for ride information.