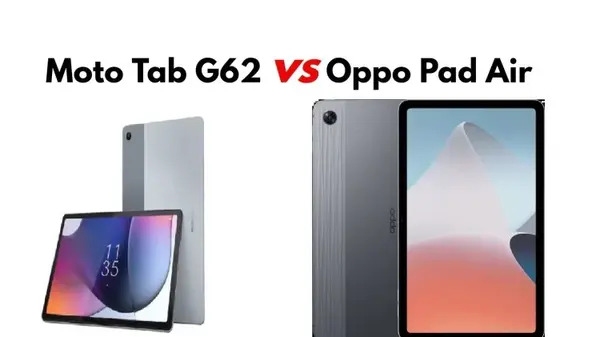 The Oppo Pad Air features a 10.36-inch 2K display with a resolution of 2,000×1,200 pixels. Oppo Pad Air tablet comes with Android 12 based ColorOS 12. Octa core Qualcomm Snapdragon 680 6nm processor has been given in Oppo Pad Air. Oppo Pad Air comes with 4GB LPDDR4x RAM, which is expandable up to 7GB (4GB physical RAM + 3GB virtual RAM). The storage of this tablet can be expanded up to 512 GB with the help of micro SD card. The tablet has quad speakers, which support Dolby Atmos.

Android 12 has been given in Moto Tab G62. It also has support for 4G network. In this tab of Motorola, a separate slot has been given for the memory card. The Moto Tab G62 sports a 10.61-inch IPS LCD display with 2K+ (2,000×1,200 pixels) resolution. The aspect ratio of the display is 16:10. The Moto Tab G62 LTE is powered by the Snapdragon 680 processor paired with 4GB of LPDDR4X RAM and 64GB of storage that can be expanded up to 1TB with the help of a memory card. It has got IP52 rating for water resistant.