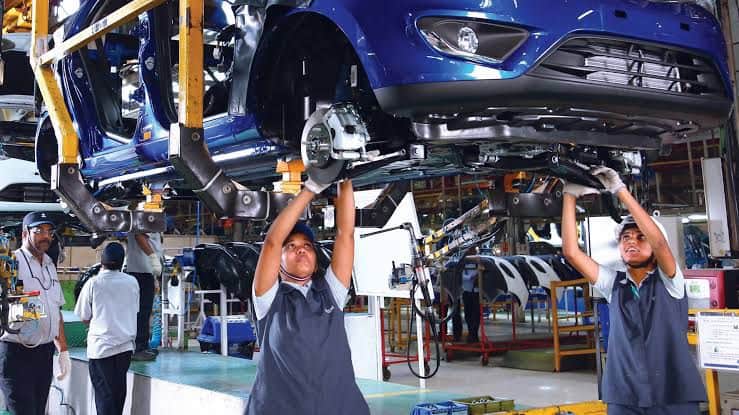 Almost 64 per cent of women are working in manufacturing plants and in engineering, according to the company’s annual report for 2021-22.

Tata Motors, which currently has over 3,000 women operating on its shop floors across its six plants in India in different roles for production of a range of vehicles from small passenger cars to heavy commercial vehicles, plans to add even more women in its factory workforce.

Similarly, MG Motor India plans to achieve a gender-balanced workforce wherein women would account for 50 per cent of its overall workforce, including in factories, by December 2023.

Currently, women comprise 34 per cent of the company’s factory workforce of 2,000 at Halol plant, in Gujarat.

Hero MotoCorp has over 1,500 women employees with a diversity ratio of 9.3 per cent at the end of 2021-22 and it aims to substantially increase it in the near future.

Another Indian automotive firm, Bajaj Auto which has an all-women line of manufacturing high-end bikes like Dominar 400 and Pulsar RS 200 at its Chakan plant, in Pune has seen women employee strength grow more than four times from 148 in FY14 to 667 in FY22.

Almost 64 per cent of women are working in manufacturing plants and in engineering, according to the company’s annual report for 2021-22.

“Diversity and inclusion in the automotive and manufacturing sector in India has become increasingly important over the past few years, with more firms wanting to build an equitable workplace.

“While companies have put in place a comprehensive framework to encourage women to hold key positions, the figures show that there is a wide gap between the idealised criteria and reality,” Tata Motors President & Chief Human Resources Officer, Ravindra Kumar told PTI.

With an eye on reducing the gap, Tata Motors is taking steps in its own ways.

The company’s Pune passenger vehicles plant has seen a nearly 10 times increase over the past two years of its women workforce, with an increase from 178 workers in April 2020 to 1,600 as of now, he said.

“We have also undertaken the challenging task of building a shop in Pune that entirely comprises a women workforce, and as of now 1,100 women are employed in this shop. We plan to increase this further to 1,500 in the next two months,” Kumar added.

At MG Motor India, women are deployed in critical manufacturing areas, paint quality and surface testing, research and development (R&D), assembly and played a key role in the rollout of the company’s first model in India, SUV Hector from its Halol plant in Gujarat.

When the company inaugurated in September 2017 the Halol manufacturing unit, which it had acquired from General Motors, it chose to apply the ‘maximum diversity’ principle in hiring completely fresh candidates for the unit. Since then, it has been consistent with its hiring strategy based on diversity, with 34 per cent of employees at the shop-floor now women.

“Amongst MG’s workforce, women are active change-makers and can be seen leading several departments. However, despite featuring one of the highest gender diversity ratios in the automobile industry, it is our continuous endeavor to achieve the perfect 50:50 ratio,” MG Motor India Director-HR Yeshwinder Patial said.

As for Hero MotoCorp, a company spokesperson said through its initiative ‘Project Tejaswini’, the company has “increased the number of women employees on its shop floor, changed mindsets, and made the manufacturing workplace more holistic – inline with its larger vision.” Also, the spokesperson added, “To meet its diversity goals, the company has adopted an integrated approach through targeted recruitment initiatives, education and training, career development, and mentoring programs to increase and retain workforce heterogeneity within the organisation.” Hero MotoCorp is also a signatory to the UN Women & UN Global Compact’s initiative – Women’s Empowerment Principles (WEPs), which offer guidance on how to promote gender equality and women empowerment in the workplace, the spokesperson pointed out.

When asked about the challenges in having more women in the workforce at factories, Kumar of Tata Motors said, “The automobile industry has been a male-dominated sector since its inception, and the concept of women technicians, sales women, and engineers joining the fold seemed like a distant dream.” This view has slowly changed over the years, he said adding, “Since FY16-17, the number of women on the shop floor has witnessed a gradual rise and today Tata Motors has over 3,000 women operating on the shop floor across all its plants.” Tata Motors took up several initiatives such as its “Kaushalya” programme, that offers its women employees two-three years comprehensive training and formal education to those who come from different parts of India after their 12th standard or ITI qualification.

“During these years of formal learning with us, the girls earn a diploma in manufacturing, post ‘Kaushalya’ they can either choose to pursue their higher education by taking admission into BE/B.Tech or continue with employment with the company or outside,” Kumar said.

“Tata Motors is amongst the few companies in the country where women form a part of the workforce across diverse portfolios and organizational hierarchies — from the company board to the workshop floors,” he asserted.

Enhancing gender balance across operations and echelons of the automotive sector will certainly lead to better decisions and more innovative ideas, Kumar concluded.