Moonraker Edition of Mahindra XUV500 is very spectacular, know what is special in it 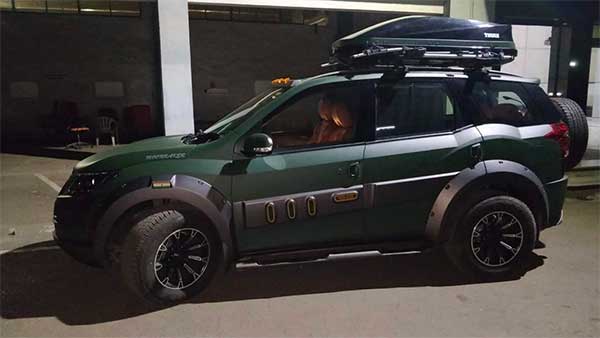 The Moonraker Edition gets off-road tyres, LED fog lamps, new bumpers, side body cladding, spare wheel at the tail gate and a moonrack on the roof. The interior of the car is completely new and it has more space than before. Four full size seats have been given in the cabin of the car, on which diamond cut stitching has been done.

Armrests have been given in the second row seats, on which some controls have also been given. From inside, this car is completely giving the look of a luxury SUV. The car seats are covered with leather covers and they also get comfortable headrests. The aircraft-inspired exhaust tip at the rear of the car makes it look more luxurious.

Mahindra XUV500 was the company’s popular mid-size SUV in India. It was made available in India at a price of Rs 13.13 lakh to Rs 17.64 lakh. Mahindra XUV500 with BS6 engine was given a 2.2 liter diesel engine. This engine generates power of 155bhp and peak torque of 320Nm. 6 speed manual transmission has been given in this SUV.

According to the information, Mahindra is planning to bring the XUV500 in a new avatar in the Indian market. The new XUV500 will be launched against cars like Hyundai Creta, Kia Seltos and MG Astor. In the company’s portfolio, this car will be placed between XUV300 and XUV700.

As we mentioned earlier, after the launch of XUV700, the company stopped production of this car. Mahindra XUV700 has been introduced by the company with two engine options. Customers can buy it in diesel or petrol engine version as per their choice. Mahindra XUV 700 has been launched by the company with 2.0 liter mStallion turbo-petrol engine and 2.2 liter mHawk diesel engine. For transmission duties, the car has been given 6 speed manual and 6 speed automatic gearbox.