Modified the car worth 8 lakhs and made Range Rover worth 72 lakhs, people are also surprised, see viral video 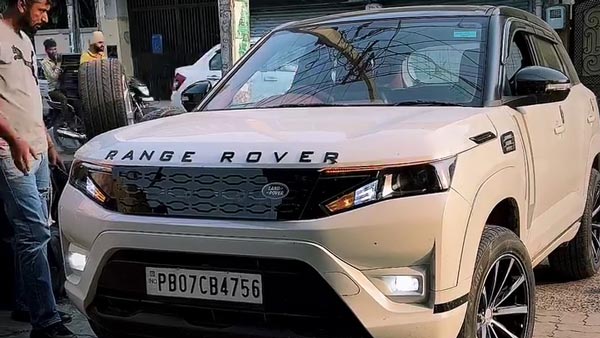 The video of this modified car has been uploaded on many different social media channels which is becoming very viral. It is said that this car is actually the new generation Maruti Brezza which has been launched recently. Looking at the vehicle, it is known that its registration is of Punjab. It can be seen in the video that the entire design of the car has been changed.

The car gets a completely new design from front to rear which matches the Range Rover Evoque. It can be seen in the video that Range Rover is written in capital letters on the front of the car. The biggest change in the car has been made in its grille and headlamps, seeing that you will be confused whether it is Brezza or Range Rover.

Talking about the side profile of this car, it has been given multispoke alloy wheels and wide tyres, replacing the stock alloy wheels found in it. Apart from this, the brake caliper has been painted neon to give a sporty look to the car. In this, the wheel arch has also been painted white instead of black. The body color of the car has also been changed to completely white.

The roof has been kept completely black with the A, B and C pillars of the car giving it a dual tone look. At the rear, the tailgate reads Range Rover Evoque in capital letters along with the Land Rover logo.

The taillights of the car remain unchanged but the back bumper has been modified to look completely like the Range Rover Evoque. Dual exhaust is also given at the bottom for a sporty look. Let us tell you that the price of Range Rover Evoque in India is Rs 72 lakhs. On the other hand, the price of Maruti Suzuki Brezza starts from Rs 7.99 lakh and goes up to Rs 13.96 lakh (ex-showroom).

Maruti Brezza is sold only in petrol engine. It is powered by a 1.5-litre K12C petrol engine that produces 103 bhp and 138 Nm of torque. The engine of the car is mated to a 6-speed manual and automatic gearbox. Brezza has achieved good sales in September 2022. It has sold 15,445 units in September.