MINI Cooper SE Electric deliveries begin in India, know what is the price and range 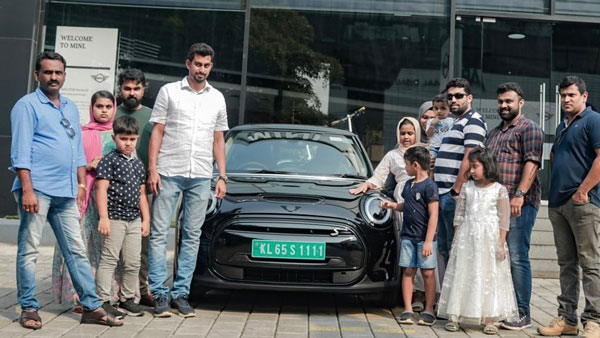 The MINI Cooper SE Electric has also been delivered in Kerala, which can be seen in black color in the image that has surfaced and looks very attractive in this color option. Along with this, green registration plates are also seen on the side of other electric vehicles. It gets yellow accents on the ORVMs and wheels which give it an even more premium look.

There have been some changes in the electric model as compared to the regular variant. The most prominent of these changes will be a fake front grille, which will make the car aerodynamic. To give a facelift to the hatchback, some of these paint schemes have been fitted with attractive yellow colored accent bars and mini electric badges. The Mini has retained the round headlights with integrated circular LED DRLs.

As we mentioned, this electric hot hatchback also gets a new 17-inch corona spoke dual-tone alloy wheel design with yellow colored rims. Apart from this, the pillars of the car have been kept black in all the color trims, which gives a good contrast to the car. The electric car is a 3-door coupe and its compact design makes it even better.

The car produces 184 hp and 270 Newton meters of torque, due to which it can accelerate to 100 km/h in just 7.3 seconds. This MINI Electric offers a unique driving experience. It is powered by a 32.6 kWh capacity battery, due to which this small electric car offers a driving range of up to 270 km.

The MINI Cooper SE has been brought in a total of four color options, this includes White Silver, Midnight Black, Moonwalk Gray and British Racing Green, Midnight Black can be seen in the picture. This is the company’s first all-electric car, which has been launched as a single, fully loaded variant as the CBU.

Talking about delivery, the company was supposed to start it in April but it has been started in March itself. In its first batch, the company had included 30 units. When the booking for the new batch starts, it can be booked from the company’s official website with an advance amount of Rs 1 lakh. The entire 30 units of the first batch were fully booked in just 2 hours.

The deliveries of the company’s first electric car have been started and only a limited number of customers have got it. Now it has to be seen when the company brings the next batch and how many units it brings.