Mercedes C-Class converted into electric car, know what is the cost of this conversion 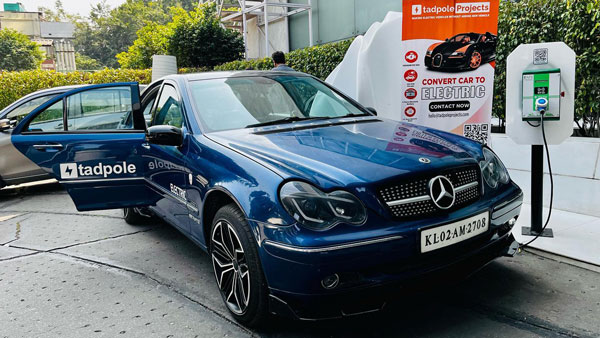 Tadpole Projects is a Delhi-based company that has converted iconic cars like the 1948 Volkswagen Beetle and the 1936 Austin 10 into EVs. The Mercedes-Benz C-Class is the 2003 C180 model, which was likely to come with a 1.8-litre supercharged petrol engine.

As standard, the Mercedes-Benz C-Class EV is claimed to offer a range of up to 150 km on a full charge, but you can expect an EV conversion kit with a range of up to 250 km and a DC fast charge along with it. Charging option is also available.

AC power takes five to six hours to complete its standard 150 km range model. The original petrol engine of the stock Mercedes-Benz C-Class C180 produces around 140 Bhp of power, but the new electric motor churns out 55 Bhp of power.

It can be set at a top speed of 90 kmph to 150 kmph depending on the preference of the EV owner. This is still less than the stock Mercedes-Benz C-Class C180, a top speed of 220 kmph, but it is quite respectable for an EV.

For example, the Tata Nexon EV and MG ZS EV offer top speeds of 120 kmph and 140 kmph respectively. The Mercedes kit from Tadpole Projects could put a successful production in the hands of luxury car owners in Delhi.

But even after this, it is believed that Tadpole Projects can present its Mercedes kit in the market at a price of more than 6 to 9 lakh rupees. At present, the government does not offer any subsidy or other concessions for EV conversion.

Let us inform that recently the Delhi government has installed the first private electric vehicle charging point under its single-window facility at the residence of a resident of South Delhi. This facility was set up under BSES Discom BRPL region.

Charging point was installed in DDA flats in Munirka area of ​​South Delhi. Under the facility, a second private EV charger was installed in East Delhi’s Vivek Vihar. The single-window facility, launched last November, aims to facilitate the rapid expansion of charging infrastructure in private and semi-public spaces such as apartments, group housing societies, hospitals, malls and theaters in the city.