Mercedes Benz EQS SUV teaser released by the company, to be revealed on April 19 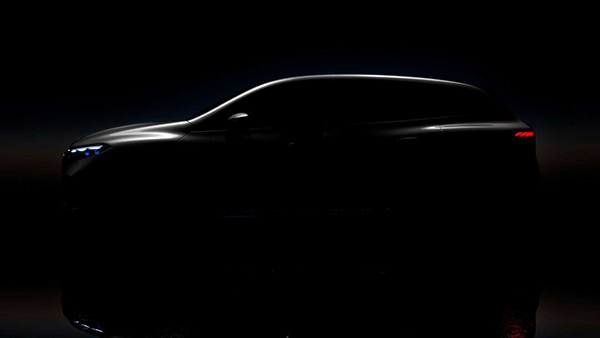 In such a situation, it is being told that it is a utility version of the Mercedes-Benz EQS sedan with the same design language, but will get a bigger cabin and higher ground clearance. The Mercedes EQS SUV will be built on the company’s EVA2 platform.

The upcoming EQS SUV will use an electrically adjustable second row. Apart from this, third row seating will be given as an option. The technology of the sedan has also been incorporated in this SUV. It has a 56-inch MBUX hyperscreen, which covers the entire dashboard as a single screen.

Apart from this, the company is focusing more on its digitization. This car has a 12.3-inch OLED display for the next passengers, in which passengers can browse using the Internet. Apart from this, a camera will be provided inside the car, which can detect whether the driver is looking at the screen or not and slows it down accordingly.

As always, Mercedes-Benz has used a lot of leather and wood inside the cabin, which gives a luxurious feel inside. Along with this, the company has provided seven different colors of ambient lighting inside this car and has also given the option of rear seat entertainment package.

Talking about the exterior design of the Mercedes-Benz EQS SUV, the company has not yet fully disclosed it. However, it should be noted that the SUV will be manufactured by the company in Tuscaloosa, Alabama, United States, with the battery supplied by its plant in the region.

The question arises whether this electric SUV will be launched in the Indian market. So let us tell you that Mercedes-Benz recently launched the S-Class Maybach and announced that it will manufacture the flagship EQS sedan in India. However, at the moment it is not known whether the EQS SUV will be made in India or not.